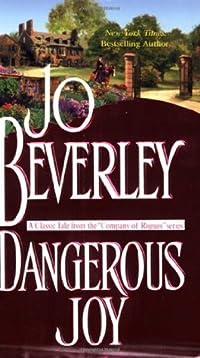 She is a beautiful, rebellious heiress.

But when they meet as strangers one mist-shrouded night, what begins as a charade borne of desperation becomes a passion undeniably real, and utterly forbidden .

Mr. Wrong happens to be a fortune-hunting turdEnglishman whose one redeeming factor is his son, the "miracle" child of his supposedly barren now-dead first wife (also an heiress).

We saw Miles and Felicity in the previous book and you could feel the antagonism coming off of them in the few scenes they inhabited. No more of the negative motivation (as Jennifer Crusie notes, negative motivation is being motivated to not do things) of women simply avoiding the slavery of marriage, this one has Felicity trying desperately to save her (unacknowledged) child from the dastardly father (biological as well as legal). So that sets the conflict in motion with Miles (newly appointed Felicity's guardianshe's not quite 21, yet) trying to save her from a life of hell (weasels making very poor husbands) and her struggling to elope with the weasel. Since Miles falls for her relatively fast (and I totally bought it), and acknowledges it even, he's desperate to save her. I didn't blame her at all, given her circumstance, but by that time she knew Miles well enough to know he wouldn't betray her confidence. I particularly liked that Felicity and Miles had to dial it back after initial impulse/acknowledgement because the last thing they needed was a second child to split their loyalties into a true Irish tragedy.

I'm not a fan of the horse-mad hoyden type of hackneyed plot, so.... Too much melodrama, illogical behavior, and a kind of silly conflict made this one of the weakest Jo Beverley books I've read.

Persnickety Irish Heroine Hides a Secret Set in 1816 in Ireland and England, this is the story of Irishman Miles Cavanagh, heir to the Lord of Kilgoran, who finds himself the guardian to Felicity Monahan, a twenty-year-old heiress who is intent on marrying a man she does not like so she can look after the mans son who she loves. Refusing to let Felicity throw her life away, Miles kidnaps his ward and carries her off to England.

For this young man has just become the guardian of a hellion of a ward, Felicity Monahan. He just can't understand what the devil her grandfather was thinking! I mean, really, he's not anywhere near the ripe old age of a proper guardian. He will just need to make sure to steer her clear of the fortune-hunting rogues and who better to recognize a rogue than a member of the esteemed "Company of Rogues." Felicity has no intention of allowing Miles control of her future for it was determined long ago by a thoughtless act of an immature girl and a callous, manipulative scoundrel. Poor Miles doesn't realize how determined she can be, and soon learns Felicity will literally fight tooth and nail to achieve her own ends.

Now, I'm nowhere near finished with Dangerous Joy but so far I'm thoroughly enjoying it. Miles is not thrilled when his step-father's uncles dies and leaves him the temporary guardian of a young woman named Felicity.

"Another black-haired passionate Irish character is Felicity Monahan, the heroine of Jo Beverleys Dangerous Joy. Fearless, horse-mad, and intense, charm is only one of the weapons in her arsenal. Suspend your disbelief time though: when do Miles and Felicity actually train any horses?

This is book #5 in the Company of Rogues books. There are probably at least 15 books listed under 'Company of Rogues' series in the library and other listings. The villain is trying to force Miles' new ward into marrying him in order to gain her substantial fortune.

From 1966 to 1970, she obtained a degree in English history from Keele University in Staffordshire, where she met her future husband, Ken Beverley. The same year, she completed a regency romance, but it was promptly rejected by a number of publishers, and she settled more earnestly to learning the craft. She is also a five time winner of the RITA, the top award of the Romance Writers Of America, and a member of their Hall of Fame and Honor Roll.