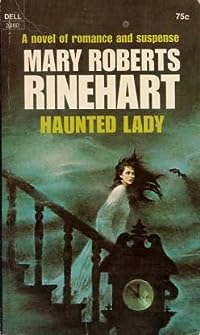 Eliza Fairbanks may be old, but she's hardly senile. So when she claims to have found bats in her bedroom and arsenic in her strawberries, Miss Pinkerton is quickly assigned to investigate. It doesn't take the shrewd nurse-detective long to discover that Mrs. Fairbanks is quite sane after alland quite dead!

Mrs. Fairbanks has been to the police because bats and rats have been getting into her bedroom, even a sparrow or two. Eliza Fairbanks is still at home in her bed and there are bats and rats running around the room? Another very strange thing, a few months before the dreaded creatures started showing up Mrs. Fairbanks had been poisoned and nearly died. When Miss Adams asks her if she contacted the police Mrs. Fairbanks tells her no, she has spent her life keeping this family out of the newspaper she wouldn't let that tarnish the family name. So she wouldn't go to the police when someone poisoned her but she will go because rats and bats are in her room? Whether they actually manage to murder Mrs. Fairbanks by scaring her to death by rodents you will have to read the book and find out, it seems like an unusual and complicated way to kill someone, but it would probably work on me.

Major characters: Nurse Hilda Adams, "Miss Pinkerton" Inspector Fuller Eliza Fairbanks, 72, the widow Carlton Fairbanks, her son Susan "Susie" Fairbanks, nee Kelly; his wife Marian Fairbanks Garrison, 38, her daughter (divorced) Francis "Frank" Jarvis Garrison, Marian's ex-husband Eileen Garrison, 35, Frank's second wife, pregnant Janice Garrison, 19, daughter of Frank and Marian Dr. Courtney Allen Brooke, 28, Eliza's doctor and neighbor William, butler Amos, handyman who lives above the garage Margaret "Maggie" O'Neil, the cook Ida Miller, 40, the maid Helpful hint: If you get confused about the relationships of the players, refer to Chapter 16 which has a police report and full bio and dirt on everyone. She wants a police officer to resolve this, but Inspector Fuller sends Nurse Hilda Adams ("Miss Pinkerton") over instead, to stay with her and calm her down, and see what can be done about the bats. Nurse Adams does indeed come across a bat, and an occasional rat also. Both statements are confirmed - Dr. Courtney Brooke (quite friendly with Eliza's granddaughter Janice Garrison) identified the arsenic, and Nurse Adams saw a rat herself.

It was great fun to read one of Mary Roberts Rinehart's classic "Had I But Known" mysteries again! Even more fun was that I was reading a 75 year old original Dell map back edition (not the first issued, but second, #814 to be exact, which has a different cover).

(p.40) Nurse Hilda Adams, known affectionately as Miss Pinkerton to her friend and sometime employer Inspector Fuller, is called in to keep an eye on the elderly Eliza Fairbanks. She herself finds a bat and a rat in Miss Fairbanks' apparently sealed room and hears mysterious noises coming from the patient's room as well as other portions of the house. That evening, Wednesday, June the eleventh, Marian left the house, bag and baggage....And only a few nights later her mother was murdered as she lay asleep in her bed. (153) Even with Nurse Adams on the spot and gathering up clues, it takes another death--this time of the maid--before Fuller and Miss Pinkerton can put everything together. Rinehart is an expert at atmosphere--the Fairbanks house is creepy at night and the inhabitants are all a bit eccentric (to put it mildly).

You would think that after a while, all these mysteries that take place in spooky houses would become repetitive. This book takes place a few years after Miss Pinkerton, which simply means I have some back reading to do. It doesn't take long for our Miss Pinkerton to start putting her nose and intellect into the happenings in the house.

The day of 'The Haunted Lady' was 1942. Hilda soon learns that the old lady is not insane, just...haunted.

Hilda Adams, also known as Miss Pinkerton, is a registered nurse who is sometimes used by the police department to gather information.