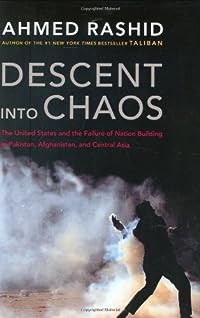 Descent into Chaos: The United States & the Failure of Nation Building in Pakistan, Afghanistan & Central Asia

Ahmed Rashid, "Pakistan's best and bravest reporter" is a voice of reason amid the chaos of Central Asia today. His unique knowledge of this complex, war-torn region gives him a panoramic vision and grasp of nuance that no Western writer can emulate.

Read the Book "Descent into Chaos: The United States & the Failure of Nation Building in Pakistan, Afghanistan & Central Asia" Online

Even more than a decade after its publication Descent Into Chaos is a must read for anyone interested in ongoing events in Afghanistan, Pakistan and the central Asian stans that make up one of the most politically volatile areas on earth. Despite USA propaganda about a desire for democracy in Afghanistan, American actions went in an entirely other direction, offering money to warlords at the expense of the central, Karzai-led government, looking the other way at the burgeoning poppy agriculture that was funding the Taliban and corrupt warlords. The USA did nothing about Pakistan providing a safe harbor, training, equipment, expertise and personnel for the Taliban, then sending them back in to Afghanistan to wreak havoc on US-supported forces. He consistently made decisions that led to the worst possible outcomes, leading to the situation today, in which Afghanistan remains much less an actual country than a collection of warlords protecting their individual turf, with a national leadership that has compromised so much that there is almost no effective central power to speak of. The entire area is a mess, with evil dictators virtually enslaving their own populations, while enriching themselves and gaining USA support by offering use of their territory as bases for US action in Afghanistan. Rashid seemed to be saying that the USA had messed up here in losing access to the nation, but he offers no suggestions for what the US might have done to retain its access. He was much impressed with a fellow named Abdul Haq. Rashid sees him as having been a potential leader of Afghanistan, a charismatic leader bent on opposing the Taliban. Yet, despite having no state support, and only personal funding from some American millionaires, Haq pushed ahead with his plans to foment an anti-Taliban insurrection, yet could manage less than three dozen actual fighters.

Later aid given to Afghanistan was considerably increased, but by then anti-American feeling was entrenched, and things in Afghanistan generally were dire. Time after time Rashid points to a lack of aid and support for ordinary people as being the main cause of failure in the Wests intervention in both Afghanistan and Pakistan. Certainly the help given to training the Afghanistan army, police force and the justice system seemed hugely inadequate and given the strength of the warlords in imposing their rule, proper state security seemed a pretty hopeless fantasy. Who America Supported: Instead of supporting the general population of Afghanistan and Pakistan, the US supported the warlords in Afghanistan, and in Pakistan it liaised with President Musharraf, who siphoned off most of the aid given by America into the army. With one hand Musharraf was supporting America (e.g., giving it airbases to use in anti-Taliban exercises in Afghanistan), but on the other hand Pakistans intelligence service and army was supporting the Taliban, even training soldiers for its army, who it saw as being a useful presence in Afghanistan. America was giving large amounts of aid to President Musharraf in its efforts to further the war against terrorism, and Pakistan was usurping its efforts every bit as much as it was helping them. Warlords in Afghanistan: Until I read this book I had no idea of the power in the hands of these men. The authority of the government, army and police in Afghanistan all seemed very fragile when compared with their strength.

Just as he tried to contextualize Afghanistan with other countries in Central Asia, the U.S. invasion and occupation needs to be contextualized within a discussion of hegemony and capitalism. There was not much of a discussion of the Taliban or Al-Qaeda, what they thought, how they formed, why they were bad. It was just assumed that they were bad and needed no discussion. I think labeling something as bad and worthy of being opposed without much discussion is dangerous, even if the label is appropriate. From my perspective, I oppose the US/European occupation, I think Karzai's an inept puppet, I certainly am not a fan of the Taliban or warlords.

Other thoughts gleaned from the pages of Descent, in no particular order: The long-suffering Afghanis appear to be an unbelievably resilient people and determined to heal their shattered country; and Rashid's honest and deep affection for them and their dream, and his resolute commitment to making sure their story remains in the forefront, is the most moving element of this lengthy reportage. Announcing one's intent to support freedom and democracy in a country such as Afghanistan whilst staunchly defending and supporting the tyrants and despots whose wracked realms border the object of said desired democratic liberty, whatever the practicality and pragmatism behind such actions, makes for piss poor optics, strengthens and emboldens the autocratic and corrupt, and enervates and dispirits those who would ally themselvesif only out of weaknessto the democratic cause. Rashid has a tendency at times to make broad generalizations and assumptions that aren't necessarily supported with facts or evidenceand seems to occasionally trip himself up with his timelines in certain statementsbut he is generally so objective in his assessments, even at their most withering, and so deeply immersed and learned in the cultures and histories that he is writing about, so familiar with the personalities, that I'm willing to give him considerable leeway with this and take him at his word in most cases.

Certainly there's no intelligence agency operating in the region, let alone warlord, who wouldn't like some get-back. Even his friends like Afghan President Karzai take a fierce pounding in this book.

It's an interesting read--highly anti-American, I must say--but it reveals a great deal of Afghanistan and Pakistan's past going back to the time of Zia, Bhutto, Daoud and the Russian invasion. It pulled me into the world of politics and current affairs, so I guess it worth a 4-star rating, even though I've read better books since. Descent into Chaos is a scathing criticism of the Bush-years, which we all must agree were a fucking disaster, and it explores the tenuous relationship of Afghanistan with it's neighbors, Pakistan especially, and it's future in World Affairs. It talks a great deal about Pakistan's failures in the past as well as the working of its political parties, and its continuous resurrection of military rule. Oh, and did I mention, he slings a great deal of blame for the current screw up in Afghanistan at the Clinton administration. Apparently, and I didn't know this before, Clinton had a chance to chop off Bin Laden's block, but he pussied out of it, which inevitably led to the fucking war (if you thick Samosa Bin Laden was behind 9/11) that's changed the course of history in South-East and Central Asia. Ahmed Rashid talks A LOT about the neoconservatives, Dick Cheney and all the other dicks, as well as Bush, the all time redneck screw up president of the United States. One thing I think everyone must agree on is that Ahmed Rashid has a wealth of sources within Afghanistan.

Let's start with the title and the main premise of the book..."the failure of nation building in Pakistan, Afghanistan and Central Asia". If you want to know just how incredibly F'd up the whole situation is then read this book. If the people of this country wanted to transform their nation it could be done. In the end I doubt the oligarchs of this country will gain access to the resources in Afghanistan. So much for the globalist intellectual elite and their tinkering in the world. The supranational sovereignty of an intellectual elite and world bankers is surely preferable to the national auto-determination practiced in past centuries. David Rockefeller So much for the world vision of the "intellectual elite" and the bankers making money off the debacle.