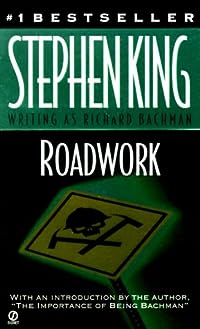 Barton Dawes unremarkable but comfortable existence suddenly takes a turn for the worst.

A new stretch of interstate is being build and Bart Dawes' house is right in its path. Bart Dawes is cracking as progress threatens to take his house and place of employment. Dawes started out mildly interesting and then just seemed pathetic and sad.

One of the strongest character studies Bachman/King ever did.

King, in an introduction, stated that Bachman had become like an alter ego for him, not just a pseudonym to sell more books; but rather a means to write what he could not as the scary but likable SK. Not one of his best (though interestingly King said this was his favorite Bachman book) this is one of his more thoughtful and introspective.

What brought it to life for me and really made me enjoy it, which I wasn't expecting, is how well Bachman/King understands what a character like Bart would be going through.

Normally I always love King/Bachman's characters but they left a lot to be desired in this story. Dawes has to be one of my least favourite characters that I've encountered in a King story.

before Roadwork, I had read The Running Man and Thinner. I thought The Running Man was okay, I liked the idea and I enjoyed the ending, however it felt like it dragged a bit in the middle. When reading more about Roadwork, I found out that King wrote this book as a way of dealing with the grief after losing his mother to cancer. An enjoyable Bachman book for me personally, but I can understand why others may not have enjoyed it as much.

As much as it pains me to do this, I calls 'em like I sees 'em, and this was an effort in futility on just about all fronts. Now I know, I know, the Bachman books are depressing and dark and bleak and grim. I've read all of the Bachman books, and they've all been dark and grim and whatnot... Dawes was OK, but every other character sounded like they should have been a cartoon. Mr. Magliore would be a fatcat Get It Man, whose right hand man would be a lanky tomcat with big ears, sharp claws, and showing ribs.

Stephen King, considered "roadwork" one of his not so good novels.

King provided biographical details for Bachman, initially in the "about the author" blurbs in the early novels. Other "facts" about the author were revealed in publicity dispatches from Bachman's publishers: the Bachmans had one child, a boy, who died in an unfortunate, Stephen King-ish type accident at the age of six, when he fell through a well and drowned. After Bachman's true identity was revealed, later publicity dispatches (and about the author blurbs) revealed that Bachman died suddenly in late 1985 of "cancer of the pseudonym, a rare form of schizonomia". Brown located publisher's records at the Library of Congress which included a document naming King as the author of one of Bachman's novels. King has taken full ownership of the Bachman name on numerous occasions, as with the republication of the first four Bachman titles as The Bachman Books: Four Early Novels by Stephen King in 1985.