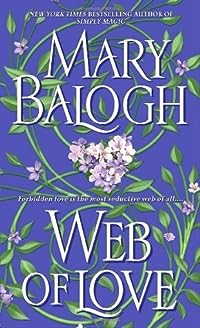 New York Times bestselling author Mary Balogh brilliantly captures the passionate conflict of a woman caught between two loves in this classic tale of friendship, devotion, intrigueand a love that is the most seductive trap of all.Hed served with her husband on the battlefieldand secretly desired her for years.

Yet for Dominic, Lieutenant Lord Eden, Ellen Simpson has remained tantalizingly out of reachuntil she is widowed by the war.

But Ellen has a secretone she can share with no onethat prevents her from fully opening her heart to Dominic.

Speaking strictly for the romance, I just don't like it when there is so much OW/OM baggage between the protagonists. The heroine here is in love with her first husband. Nevertheless, she worships and truly cares for her husband and so, her love for the hero, is necessarily fraught with guilt and revulsion.

I also really liked the secondary characters, especially the daughter of the previous husband and the Lieutenant, saved from the battle, though heavily crippled and full of anger and anguish.

What I Really Liked: - The Battle of Waterloo!

Web of Love by Mary Balogh I must say that I thoroughly enjoyed this book. Jennifer and Ellen enjoy Brussels society and as Charlie is not inclined to go to many social outings, Ellen and Jennifer find themselves most often with the dashing Lord Eden (Dominic), a friend of Ellen and Charlies. Later, when Charlie dies on the battlefield and Lord Eden is wounded and brought to Ellens home for care.

Rather than be incredibly focused on Ellen and Dominic we got a snapshot of the war and a peek into a number of lives. Charlie and Dominic are in the military - and they're BFFs. A lot of the book is devoted to the war and to Ellen's relationship with Charlie. There are also about 27 other characters whose issues give the book a well-rounded feel.

I didn't think I was going to give this book 5 stars as I was reading it, but there is something so satisfying about the way Mary Balogh tells a story that by the time I had finished I just had to do it.

Perhaps not the most passionate marriage, but one full of comfort, affection and indeed love is between Ellen and Charlie. Ellen "wakes up" when Eden's sister catches them snuggling/kissing and Ellen becomes upset (more with her self as she feels she has tainted Charlie's memory by sleeping with the best friend) and doesn't want Eden anywhere near her anymore. Eventually time finds them in London and Eden can't keep Ellen out of his mind no matter how he tries. Although extremely awkward, they eventually work through the awkwardness only for Eden to discover that Ellen is pregnant. Angered beyond words, they have to start again and eventually, with time spent at Amberly with Eden's family (who are also great friends of Ellen... they also invited her to stay as a way to "pay her back" for saving Eden's life) Eden convinces Ellen to marry him.

That said, I liked Dominic and Ellen much better than Edmund and Alex from The Guilded Web. More depth. One plot weakness I will point out: I felt that the author shouldn't have glossed over a certain scene between Ellen and Sir Jasper. This book had grit to it, so we'll call that nougat, but there were plenty of nice and harmless family moments too, so we'll throw some milk chocolate in there.

I liked Dominic much better in this book than I did the first book, and I'd even seen that Alexandra had grown up some from her book.

Mary Balogh started writing in the evenings as a hobby. She has won numerous awards, including Bestselling Historical of the Year from the Borders Group, and her novel Simply Magic was a finalist in the Quill Awards.