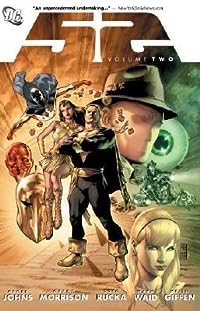 After the INFINITE CRISIS, the DC Universe spent a year without Superman, Batman and Wonder Woman.

The main featuring roles / arcs, with the likes of Ralph Dibny, Booster Gold and Steel (and more) continue here, but there are some additional characters that put in an appearance, such as Lobo who features in the Animal Man, Adam Strange and Starfire sequence. Remember, this is the aftermath of a sequence of events where a number of DC characters were killed off. This volume also serves as a reminder that Animal Man is one hell of an underrated character! Although Ive read all of this before I cant seem to remember where this particular bit is headed.

Note that "Final Crisis" follows after this and was published in 2009. VOLUME TWO In this volume the Metal Men is introduced more, a mad scientist escapes and Detective Montoya and her new partner visit the realm of Black Adam. Booster Gold saves Metropolis and finally gets some credit ironically and Black Adam marries his new Isis with attendance by the Marvel Family. Doctor Sivana and his mad scientists continue to nerd out while Sivana's wife invites the Black Adam Family to dinner and then asks them to find her mad scientist hubby.

In volume 2, the various storylines are really starting to kick into gear. By the end of the collection, I'm starting to get a sense that this isn't going to end very well for pretty much everybody.

And while it does have disparate threads the Steel storyline, the Animal Man/Starfire/Adam Strange's space opera trek storyline, and the Ralph Dibney stories don't really seem to be dovetailing nicely together, this book does have an extended run of weeks/chapters that directly cross over Renee/Question with The Black Adam storyline really nicely. We expect all of these stories to coalesce, but if I remember right this series really doesn't come together like that. I've every expectation that it ends strong (because I remember it does), but that still doesn't change the fact that when I was reading this series week-to-week in issues, it was a book I was enjoying, but picking up more compulsively than "OH MAN WHAT IS GOING TO HAPPEN THIS WEEK". But it isn't the "man I love this and want to read more things like it" as much I thought I would be by this point.

With an intricate story like this, it would be easy to get lost if you started with this volume. Luckily for me I just re-read Infinite Crisis and 52 volume 1 so I came into this one understanding most of what's going on. The Renee Montoya and Question plot is really starting to get exciting, I enjoyed their story crossing over with Black Adams. The Adam Strange, Animal Man and Starfire story is also starting to heat up something chronic.

Grant Morrison in in love with his own weirdness and only works in this series because he has others to reign him in. Rucka is writing barely serviceable super hero stories, but thinks he is J.D. Salinger. Eek. Anyway, as much as I slam the book, I love it, despite the Rucka/Morrison pretention.

I'm not sure how the book would read to someone totally unfamiliar with the DC pantheon, but I found it to be pretty accessible, even though I've long forgotten the outcomes of the past few DC Universe events.

He worked with Richard Donner for four years, leaving the company to pursue writing full-time. Since then, he has quickly become one of the most popular and prolific comics writers today, working on such titles including a highly successful re-imagining of Green Lantern, Action Comics (co-written with Richard Donner), Teen Titans, Justice Society of America, Infinite Crisis and the experimental breakout hit series 52 for DC with Grant Morrison, Greg Rucka and Mark Waid.