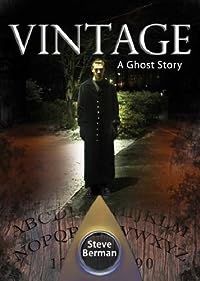 In a small New Jersey town a lonely boy walking along a highway one autumn evening meets the boy of his dreams, a boy who happens to have died decades ago and haunts the road. Awkward crushes, both bitter and sweet, lead him to face youthful dreams and childish fears. With a cast of offbeat friends, antiques, and Ouija boards, Vintage offers readers a memorable blend of dark humor, chills and love.A finalist for the Andre Norton Award for best speculative fiction young adult novel.

This was interesting enough to keep my attention, and it thankfully wasn't a ghost love story, because that concept is just weird. Melindo is actually able to talk to Josh. I liked that Trace wasn't the overbearing girl friend so typical of M/M (probably helps that this isn't actually M/M) and that the ghost story doesn't go in quite the direction I expected.

The seventeen-year-old male narrator knows that his parents would never accept his sexual orientation (gay), which is why he lives with his Aunt Jan, who is generous and accepting but a terrible cook. The reader follows the narrator, learning that his time with friends (especially with Trace, whom he admires for her grace and style) is the high point of an average day. The narrator has temporarily dropped out of high school and found an undemanding job as assistant to an eccentric man who runs a vintage clothing store. The narrator's personal brush with death, his attraction to other boys and his interest in the past seem to open the veil between the worlds which normally seems to prevent contact between the dead and the living. A high school athlete in vintage clothes, with poster-quality good looks, appears on a lonely stretch of highway and speaks to the narrator. The narrator asks Trace what she knows, and he learns the history of the handsome boy, Josh, who seems to be stuck in an eternal purgatory of walking home, night after night, without ever reaching his destination. The narrator is amazed to realize that he is not only wanted by a ghost but by a live boy as well. The narrator is becoming aware of what it would be like to live--in every sense of the word--with someone who cares for him. By the time the conflict between life (change) and death (stagnation) reaches its highest point, the reader is cheering for the narrator and his developing relationships with other live people.

Generally, ghost stories tend to distress rather than soothe me; however, Steve Berman's ghost story, 'Vintage' was an exception. Vintage' is also the first story I've read in which the narrator, who was also the main character, wasn't introduced in the beginning of the book. I admired the young man's ability to accept his intuitive gift and his willingness not only to help put Josh to rest, but also to solve another mystery, therefore giving closure to Trace's family. Despite all of this, Mike manages to find his individuality through his art, which paves the way for a loving relationship between him and our narrator. It's not only a ghost story filled with frightening other worldly images; it is also about the angst of being a teenager and gay and wanting to belong, be accepted, and loved.

Just somehow felt too fast, like more could have been put into the main plot instead of just padding it with other characters. While in Philly, the main character and his friend do E.

When he meets the wanderer of highway 47, he thinks having an attractive dead guys attention is exciting, but as his encounters with spirits intensify, this ghost becomes too much for him to handle alone. - This read is definitely for older teens and adults due to casual drug use and sexual scenes. This may have had to do with the fact that Vintage is also a horror and certain scenes will leave you replaying them in your head after all the lights are off. I am an avid reader of horror, but even I had to decide not to read a certain scene too close to bedtime.

It's not often I feel lucky enough to find a young adult book where the protagonist is a well-written gay teen, and it's even less often that teen isn't your typical example. The goth, vintage clothes loving voice in this book was a delight. A handsome young man in fifties wear, the clothes grant the main character just enough courage to speak, and the two connect.

4.5 stars While searching for a unique YA book I stumbled upon Vintage: A Ghost Story. one being a ghost named Josh Wyle.

Reading that blurb, I thought the angst love story will happen between the hero and the ghost.