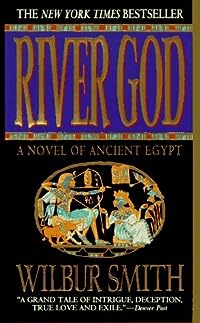 For Tanus, the fair-haired young lion of a warrior, the gods have decreed that he will lead Egypt's army in a bold attempt to reunite the Kingdom's shared halves. But Tanus will have to defy the same gods to attain the reward they have forbidden him, an object more prized than battle's glory: possession of the Lady Lostris, a rare beauty with skin the color of oiled ceder--destined for the adoration of a nation, and the love of one extraordinary man.

The eunuch slave, Taita, loves Lostris, daughter of the evil Grand Vizier, Intef, of the kingdom of Upper Egypt (and owner of gentle Taita). Lord Intef, has his chief guard Rasfer, beat his slave brutally, for minor infractions, and Rasfer loves his work...The weak, tired Pharaoh, has let Lower Egypt, the delta kingdom, slip away , and now there are two Egyptian nations, in the 18th century ( B.C.)... The king sees the daughter of the Vizier, in a play, written by Taita, inside the sacred temple. Tanus, is devastate, along with her comes Taita, and becomes very useful to the Pharaoh, in his Nile River palace, on an island, many miles from Thebes. The palaces are abandoned, Taita, Lostris, Tanus, the Pharaoh's son, and many thousands of others, are on board.

At over 600 pages it still managed to keep the action flowing right until the end and it doesn't hurt that Taita is one of the sweetest and most likable characters I've come to know in a long time. Taita comes across as a priss to begin with, and there is that question of how Egyptian society flourished for thousands of years without him, considering the fact that he invents just about everything. The action just kept coming, and it's been a while since I was so hooked on a book, constantly wanting to know what happens next. I can't vouch for the book's historical accuracy, although obviously I would expect Taita's story to be completely fabricated, but it didn't seem too far off the mark in general aspects of Egyptian life. I'm not sure how quickly I'll rush on to the next books in this series, if only because I want to preserve the memory of Taita as he is in River God. But this will certainly be a re-read somewhere down the line.

I dont usually advocate the burning of books, but in this guys case Ill make an exception. I think Ill use F7.

Ancient Egypt mesmerizes me and I loved Wilbur Smith's River God. Taita is a very likable character and narrates the story.

The images are still with me, but what makes it truly wonderful is the main character, Taita. But there's a sense of tongue-in-cheek to his abilities at times that makes me think he's laughing at himself just a little even though his attitude is one of natural superiority. In a time when heroes could be elevated to god status in the eyes of the people, I didn't find this to be out of place. Just in case you think it might be boring following the life of a noble slave-genius.

ONE OF THE BEST ADVENTURE NOVELS OF MODERN TIMES Only drawback; it's long, too long, but for sheer imaginative scope, Wilbur Smith's River God tops everything I've ever read. The story is narrated by the charming eunuch slave Taita, whose secret passion for queen Lostris surprises - until we learn Taita reached manhood before being castrated in order to render him "safe" for service in the harem. If Wilbur Smith lived on Lake Ontario, he'd have written "The Secret Ever Keeps".

River God is narrated by a slave Taita, who, the way the book tells it, is the pinnacle of human life. He is more annoying in that he's in no way modest; since he's narrating, he constantly tells you how good he is at everything, not that he's trying to brag.