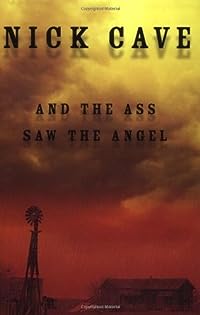 And the Ass Saw the Angel

Caves only novel to date takes on the southern gothic in this bizarre baroque tale. Born mute to a drunken mother and a demented father, tortured Euchrid Eucrow finds more compassion in the family mule than in his fellow men. But he alone will grasp the cruel fate of Cosey Mo, the beautiful young prostitute in the pink caravan on Hoopers Hill. And it is Euchrid, spiraling ever deeper into his mad angelic vision, who will ultimately redeem both the town and its people. Surprising, remarkable. The Atlanta Journal

Read the Book "And the Ass Saw the Angel" Online

so i am going to review this one after all, because the book i am reading now will probably take me forever, and i dont want to get out of practice writing reviews that have nothing to do with the book. i also wonder what mr nick cave would think about the word "antihero" being applied to this book. i havent read this book in at least 5 years, but i can still see every character, every building, fortress, dog, prostitute, church - everything. if the three most important rules of door-to-door salesmanship, as we were taught in the death of bunny munro are "vagina, vagina, vagina", this book teaches us the three most important rules of messiah-dom, "crazy, crazy, crazy". i may have to read it again soon - but dont even ask me for my copy because the answer is an emphatic "no".

If Gabriel Garcia Marquez got knocked up by William Faulkner and birthed a deranged novel that was kept locked up in the basement and beaten daily, it would be 'And The Ass Saw The Angel.' I don't normally write reviews, but this book keeps tumbling around in my mind like shoes in a dryer.

Last week though I started reading this book and, before turning page 10, I was munching on my fingers again. Such was my reaction to Nick Cave's gorgeous first novel: convulsive. Well, this novel has all the hysterical beauty of a medieval tale told by a hermit gone insane. One of the most beautiful titles in the history of literature, at least for me, summing up in six words all the truly iconic power of this book. A grotesque protagonist living in a shack surrounded by a junkyard (more precisely, Euchrid Eucrow, a dumb kid doomed to undergo any sort of physical and psychological abuse), with a sadistic alcoholic as a mother and a bipolar psycho as a father. Then a foundling - the daughter of a junky whore Euchrid identifies with his guardian angel and is almost lynched by the mob - is rescued in the village, and the Miracle occurs: the following day the rain is over and the child is hastily declared to be a Saint, the Almighty's gift to His penitent sons. Because Cave's writing is like the artefacts of those barbaric tribes from which I - as a northern Italian - happen to be descended: absolute beauty blooming in monstrosity, gold and gems scattered in the filth. This is one of those books in which literature is on a level with visual art. In Cave's prose, a kid spitting on the ground opens up a lurid scenario of microscopical and yet gargantuan geography: spit and dust melt and turn into a muddy landslide in front of an ant carrying its cargo of crumbs, stubbornly climbing the tiny impromptu hill standing in its way - almost invisible when you're a kid spitting on the ground, high as a mountain when you're an ant carrying a crumb... What follows is one of his gorgeous, expressionist descriptions of the landscape: " The air turned tactile and red - it kinda oozed into mah lungs, soupy and reeking of evilness. It had taken the look of a vast membrane that stretched itself, like peeled skin, across the valley to form a roof, sealing in the stuffed light. They don't recall 'the good old times', why should they when the most delicate poetry is at hand: "Ah remember a time of eudemonia", sighs the protagonist. Because I've always sensed this book had ALL I look for in literature and art: the Beauty of Outrage and the Outrage of Beauty - the horrible, omnipotent Beauty that flourishes where she's supposed to wither, like a flower blooming on a battlefield. Beware though: this book goes deeper down than a finger.

The first thing one will notice in Cave's book is that the principal narrator is dense with a lugubrious sort of prose made up in striking part by words that won't be found in any dictionary (as they are made up). If Cave would have either held personal restraint or kept an editor worth more than the cost of a community college education, And the Ass Saw the Angel would have clocked in at novella-length of slightly more than a hundred pages - and would, by that measure, have made a terse, quirky, intriguing look at madness. There were moments when I thought I might have a good (if offbeat) book in my hands. Pieces of prose that made me think that Cave really did know what he was doing, such as his description of a particular woman as a "xylocephalic ogress." But such rays of warm and happy light were always and inevitably to be short-lived, as Cave would draw the reader, nails scrabbling for some hold on light and sanity and good reading, inexorably back into his drearilous swampfief of monotonating garballations. I read somewhere that Cave himself doesn't even think the book is any good.

2.I was sitting on the Q11 when a couple of kids (proly like 12 or 14 years old) started laughing at the title of the book. and they both started reading it and laughing and I felt so cool!!! When they were done he passed me the book back and said, That was funny, thank you. I made this 2 kids read something funny about the most read book in history.... and yet you get 5 starts cuz now I have one more kick ass word added to my vocabulary and I also had the chance to teach something funny and cool to a couple of kids =)

The novel's protagonist is a character named Euchrid Euchrow, a physically deformed and mentally deranged mute living in the fictional backwoods town of Ukulore. The novel is insane, grim, and overwrought.

On some sort of word/sentence level I'm admiring it, it reads a bit like music. I'm moving on, having read the first 60 pages or so - but I can't help feeling I've let the author down and that it deserved more from me.

I loved/hated it in equal measure and likely would guess most of you would toss it across the room. The father comes from a seriously inbred lineage, and while he stays with his wife for years until her death, the way he deals with his daily heaping of poison is to trap animals. In this menagerie, the living animals hold battles royale in order to live - he watches them like an emperor enjoying gladiators slaughtering others. Over the years, a beautiful child of prophecy is born in this town and found at the feet of their statue of a vengeful angel - her wings alight and hand holding a scythe. Euchrid, now older and grower more insane over the years, believes this young girl and he have a connection. As someone who has had two spoiled dogs and two worthless cats sleeping in the bed with her for the past 38 years (live ones, not remains like we find in this book), I was able to distance myself from this portion. In a million years, I wouldn't have read this except our small reading group here in GR has had each of us nominate stuff that nobody but we weirdo-serious readers would enjoy discussing. "The air had turned tactile and tinted red it stuffed the valley thickly and there was an electricness about it that crackled inside my head like paper. Well she was precisely that - a great whopping whale of a hog's [email protected] with a dry black maggot for a brain." "Fireworks hissed and spat aloft. Every winged bug in a night's flight clamoured in the doorway in a frenzy of death - stupid gnats knocking their brains out to enter the bright eye.

One interesting thing I noticed is that while many readers placed it in the Southern Gothic style, the majority placed it in Horror.

Significant crossover is evident between the themes in the book and the lyrics Cave wrote in the late stages of the Birthday Party and the early stage of his solo career. The American publication of the same book contains a foreword by a different author.