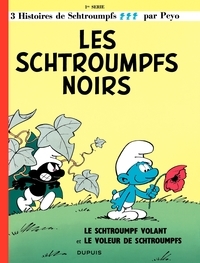 Although I do indeed think that Peyo's Les Schtroumpfs noirs, his three featured tales about the eponymous little blue Smurfs (and the first of an entire series of comic books on the latter) is entertaining enough and also mildly interesting, diverting and at times even socio-critically sarcastic, the rather constant and massive use of the word smurf whenever the little gnome-like blue entities are conversing (and in the French original, smurf is of course rendered into schtroumpf, which being a fantastical and artificial language creation actually seems to be phonetically and in my opinion likely very much deliberately linked to the German noun for sock or stocking, to Strumpf), while definitely entertaining and even rather fun to a certain extent, does tend to become more than a bit tedious and repetitive (with its totally and massive overuse), it being much too much of the proverbial good thing so to speak (not to mention that because I am also and perhaps even primarily using and reading Peyo's Les Schtroumpfs noirs for French language practice and review, the fact that in nearly EVERY sentence uttered by the Smurfs, they are somehow smurfing something or someone, they are using schtroumpf in some manner, that can be, that actually is more than a trifle confusing on a linguistic and language learning level, not so much that it is being done, but that it happens constantly and with no break, with no end in sight). And it is not really and all that much the fact that the Smurfs turn in zombies (but really, when one thinks of what the Smurfs are like in and of themselves, with their one-sidedness and lack of nuance character and personality wise, them turning into zombies or potential zombies is not that much of a difference after all) but rather that they turn into black coloured zombies which has been and still is often condemned and seen as somehow racist (so much so that Les Schtroumpfs noirs has only recently been translated into and released in English, and only after the colour to which the Smurfs turn had been rendered purple and the title of the book changed to The Purple Smurfs). My main and personal reasons for only mildly liking but absolutely not ever loving this collection are as already mentioned above for one the tendency of the Smurfs to constantly be presented as conversing using the word "smurf" (basically because it just becomes a bit too repetitively tedious and that from a language learning point of departure this constant "smurfing" really does tend to render the presented narrative at times frustrating and often rather confusing) and for two, and indeed much more importantly, that the Smurfs are all rather majorly typecast, non-nunanced beings that really not only simply seem to exist but not actually live, but that they also are utterly under the direct control and thumb of Papa Smurf, of perhaps a benevolent but yes still very much an in all ways dictatorial authority figure.

I found out that the Peyo's original intent was exactly what the cartoon turned out to be: a series of gags involving one-dimensional characters and the word "smurf." I liked the cartoon growing up, so this wasn't really much of a problem to me. The main difference is that the cartoon characters were more developed than the ones in this comic.

I had no idea that this storyline was of the original Smurfs stories in the comics.

Cute story about a smurf being bitten by a BZZ fly which then infects the bitten smurf. Papa Smurf attempts to find a cure, but not before nearly the entire village of smurfs have been bitten. After capturing the BZZ fly Papa Smurf is able to find a cure. The second story follows one smurf in particular in his desire to fly. In the end he discovers a way to fly, but is unable to come back down to the ground. The story ends with his desire to sail....yet he finds he is too heavy for this dream!! I've learned a few new phrases from this little book such as "smurf-tastic", "Shut your smurf!" and "Smurf-reka".