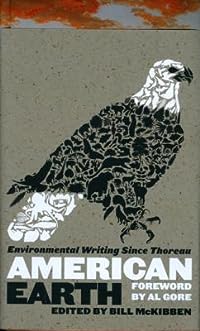 As America and the world grapple with the consequences of global environmental change, writer and activist Bill McKibben offers this unprecedented, provocative, and timely anthology, gathering the best and most significant American environmental writing from the last two centuries.

The anthology includes a detailed chronology of the environmental movement and American environmental history, as well as an 80-page color portfolio of illustrations.

McKibben has assembled a fantastic list of writers, from those I'd read (Thoreau, Muir, Carson, Dillard, Pollan) to those I've been meaning to read (Aldo Leopold, Jane Jacobs, Edward Abbey) to those I'd never heard of (Barry Lopez, David Abram) and all the way to the completely unexpected (P.T. Barnum, R. McKibben describes this piece as the "modern nature essay being born," referring to its formal qualities, but its literal focus on the link between food and our relationship with nature draws a clear connection to Michael Pollan and today's nexus of food, health, hedonism, and the environment. Another fairly literal connection is the choice of John Muir's "A Wind-Storm in the Forests" and an excerpt from Julia Butterfly Hill's The Legacy of Luna. Actually, pieces like Dillard's made me wish for some colonial pieces in this collection, or anything from pre-Romantic Americans, when horror was the predominant response to the wild. I'd say if you're the kind of person who's already read pieces by at least 5 of the authors collected here, you should pick it up to peruse now and then. Roosevelt writes, "How immensely it would add to our forests if only the great logcock were still found among them!" which certainly suggests the (probably) extinct Ivory-billed.

He writes, "I believe the clacking in the sky over the Grand Teton is the song of the white pelican. Some sing, some whistle, some yip, some clack in the sky, some make love to a violin.

I only gave this 4 stars because it's a collection of writings rather than a singular piece of writing.

We also need a song for national anthem that fits the times we live in, that is an anthem that encourages us to protect the environment, which war and preparation for war certainly does not. In any case, American Earth is an inspiring and timely collection of excellent writings.

So in that sense I am right at home in this book. I would also like to see a counter anthology put together, because anyone who enthusiastically reads American Earth should also develop a better sense of what they're up against.

American Earth: Environmental Writing Since Thoreau, edited by Bill McKibben, with a foreword by Al Gore, is a hefty tome published in 2008. The book of over a 1,000 pages covers a period of more than 150 years and includes writing by famous and not so famous people on a wide variety of environmental related topics.

In these pages, you will find a veritable who's who of nature writers, and a dim sum of their writing.

Bill McKibben is the author of Eaarth, The End of Nature, Deep Economy, Enough, Fight Global Warming Now, The Bill McKibben Reader, and numerous other books.