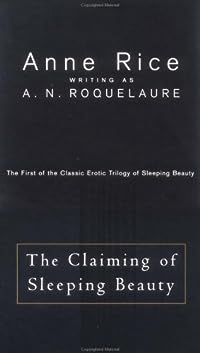 The Claiming of Sleeping Beauty

Now Anne Rice's retelling of the Beauty story probes the unspoken implications of this lush, suggestive tale by exploring its undeniable connection to sexual desire.

Here the Prince awakens Beauty, not with a kiss, but with sexual initiation.

Read the Book "The Claiming of Sleeping Beauty" Online

Public service notice: This book has been brought to you thanks to the generous sponsorship by the word 'spanking'. And 'boring' is definitely not the word that any erotica book should be described as, right? But I do have a problem with rape presented as being okay and even sexy. Rape is never okay, and it should not be used as a "sexy" way to start a story. Make it consensual or do not write about it at all, and definitely do not present that as sexy. Well, 'read' is not quite accurate of a word; it was so badly written that I ended up having to skim through most of it. It is boring, badly written, almost glorifies rape, and apparently does not believe in consent.

This book elicited very strong emotions from me, from disbelief to WTF to OMG enough with the spanking already!

Now first of all,let me clarify that I love erotica and the fact that this story was supposed to be an erotic-retelling of Sleeping Beauty, captured my attention. Now ever since I had read my first fairy tale,Cinderella,I had always dreamed of a Prince Charming,loved him,sighed with my friends over him,and just...LOVED him. And look at this Prince Charming.... "Now everyone is going to want to have a look at Beauty," the Prince said to the Captain of the Guard. And now Readers,the beginning where the Prince finds the princess and takes her (I'm not going into a discussion whether it was rape or not) and then wakes her up,was actually the best part of the story.Yes,you heard me right.The story became more and more ridiculous as it progressed.

I was hoping for a more grown up version of the classic Sleeping Beauty tale.

First Book: Fun and novel read. Interesting background and lots of creative naughty bits for fun. She lost most of the background and plot and even though there was a variety of positions and objects -- she recycled quite a bit of the sex scenes.

And, if your religious, republican, right-wing, or "bug-crawled-up-your-arse" sensibilities are easily offended by pornography, then this book is not for you and you should refrain from reviewing it. 2) On that note, this book deals with the BDSM (Bondage and Sado Masochism)brand of sex. If you're not even curious about it, refrain from reading and reviewing this book. The scenes depicted in the books are either heterosexual, lesbian, bisexual or homosexual. In that sense, this series rivals Machiavelli's "Il Principe", inasmuch as the story spins around the teaching of how to properly serve the people. And in that sense, this series can even be read as a political treatise.

Disclaimer: I read this book on a dare. I'm not a fan of pure erotica and I'm no expert in BDSM, so it was pretty much obvious from the start that I wouldn't enjoy this read. I don't feel like giving away any more of my damaged brain cells to this nightmare, so I'll just copy/paste the plot summary given at the beginning of the 2nd book, Beauty's Punishment: After her century-long slumber, the Sleeping Beauty opened her eyes at the kiss of the Prince, to find her garments stripped away and her heart as well as her body under the rule of her deliverer. At once, Beauty was claimed as the Prince's naked pleasure slave to be taken to his Kingdom. Well, if you think so, just read my status updates to get a "tastier" insight into the extremely kinky, painful and humiliating sex antics Beauty and the other love slaves go through over the course of this book. I "blame" Ms. Rice's juvenile writing for that: it was wordy and redundant, the story didn't flow effortlessly and all characters were one-dimensional and unlikable - in summary, this book became downright boring after the initial shock provided in the 1st chapters. Beauty and any other (un)fortunate love slave in sight got spanked for everything, over and over again. Oh, you bad girl, you need to be punished... Like I said above, I'm not familiar with the BDSM scenario and I could have been easily thrilled (in a good or bad way, it doesn't matter) by whatever "novelty" she wrote.

By the end of it Beauty is still innocent but shes really only touched the surface and so has the book so the ending isnt really all that surprising and I think the perfect prelude to the next one.

When I was a preteen, I was out with my mom having brunch or something, and I remember these two ladies sitting nearby trying reaaaalllly hard to speak quietly, so all I could really make out was "Pssst....did you hear about...psst-psst...Anne Rice...psst-psst...erotica...pssst-psst-psst...sleeping beauty...pssst...bondage." Then they noticed that I was there and doing whatever the middle school kid equivalent of a dog staring at you with one ear lifted is, and started talking about something way less interesting. Also moral of the story: probably not best to discuss such things in front of little pitchers with big ears and semi-eidetic memories (not that they could possibly know that - but hey, if you ladies happen to be following me now, please consider this review personally dedicated to you, mwah) ***WARNING: MAJOR SPOILERS AND INAPPROPRIATE CONTENT*** Tl;dr review "You get a spanking! I get that some people are into that, and if you find someone who would like to do that stuff with you and there's consent and that's your jam, then whatever, but I find it totally off-putting and do not enjoy reading about it. Fuck this, I see your paddle and raise you eight hundred gentlemen on horseback armed with rifles and cannons." Beauty is subjected to multiple humiliations: paraded about naked, where she's molested by total strangers, raped again by the prince, spanked, spanked, spanked, and yes, spanked some more, paraded about in front of all the courtiers (naked) while bound and being humiliated and spanked and also yes groped and molested some more, then she's taken outdoors and given pony shoes and spanked up and down the gardens, then she's foisted off to the prince's mother to be sexually assaulted and spanked some more, and on top of this she's fed wine and food on the floor like a dog and is only allowed to dress and undress people with her mouth, and at the very end of the book she finally gets to sleep with the one guy she actually likes - a fellow slave - and the book ends with his recollections of his punishments which include, but are not limited to, being anally raped with a whip, having numerous ben-wa balls shoved up his butt which he is then instructed to poop out, being thrown in rotting garbage while being molested, groped, etc, and oh, yes, constant spankings and rape. (But then, if I were a character in this book, I'd totally be one of those people saying, "Um, yeah, they're so busy doing all that crazy stuff right now, maybe we should bring in our military to free those people they are CLEARLY keeping as prisoners of war and not humanely, either!") Given that I read bodice rippers, I know some people are going to be surprised at the low rating. In this instance, it really bothered me because I felt like the rapes in this book were being roped off with the rest of "that BDSM stuff" as typical kinky nonsense, and no, real kink is all about consent. ...with his left hand felt the soft hairy little pelt between Beauty's legs... (17) ...he suckled her breasts almost idly as though taking little drinks from them (17) Now that I think about it, KUSHIEL'S DART and CAPTIVE PRINCE both had very similar premises to this book (fantasy kingdoms whose courts/culture revolve around BDSM-like goings-on), to the point where I can't help but feel that they were probably indirectly inspired by THE CLAIMING at the very least. TWO PEOPLE WANT TO SPANK ME TONIGHT - WHO WILL GET TO WIELD THE PADDLE?" I actually liked CAPTIVE PRINCE.