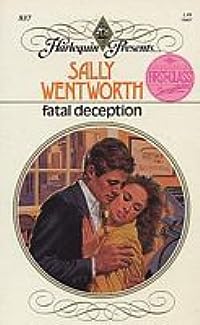 He was deceiving himself this time...Norrie had fallen disastrously in love with Bruno Denton four years ago, when he'd taken over her father's newspaper. Unwittingly she'd given him everything he'd wanted--her body, her soul and the information he'd needed to destroy her father.Now that she'd succeeded in rebuilding her life, she couldn't bear to sit idly by as history repeated itself--not when Bruno was trying to take control of more than just a newspaper..He was also trying to take control of her little nephew--as if he thought the boy belonged to him.

The book starts with the 24 yr old h being told her job is in jeopardy, she works for a small town newspaper that has been bought out. Turns out the new owner is the H, who four years earlier the h was madly in love with, until he fired her father from editor position of the newspaper that the H's company had bought out. The h felt that he went behind her back and used insider information to not only fire her father (who died a year later and was possibly a suicide), but other people at the paper too. Meanwhile, the h's dad died, her brother's pregnant wife died at the birth of the baby, and the h's brother rejected the baby, Ben, and left the country. She doesn't discuss the details of her life with anyone, she goes into the newspaper two mornings a week to check in with the office, but basically she works from home part time and takes care of Ben. The people around her think she is Ben's bio mum, and she doesn't say anything different, figuring it isn't their business. When the H shows up as the new boss, the h tries to stir up some trouble for the H with the newspaper union and the other employees by warning them about what he did 4 years earlier by the firings, etc. She was deeply, deeply devastated by the H's actions and her father's death and taking Ben when his bio dad rejected him. She hurt badly and he basically comes back after walking away four years earlier, expects her to fall into his arms and pretty much tells her to "get over it". Rightly or wrongly, (and we never get a really clear picture of what exactly went on four years earlier - but more on that later,) the h had a right to feel whatever she felt. We will never know cause SW doesn't go there - first he was one way and then he was another so I can't really judge.) The h goes home and the H shows up a bit later and sees Ben - he accuses her of having his son and not telling him, (the h's former editor told him that he was the father of the h's child.) The h is pretty flabbergasted and denies it completely. It is the seekrit baby that isn't trope - btw Mansion for My Love by Robyn Donald is the other HP ( but that couple had enough problems to be going on with - pregnancy wouldn't have helped the situation.) As soon as the h denies the H is Ben's dad, the H accuses her of lying cause her editor SAID he was the dad. They get into a fight, the h denies he is the dad multiple times and she tells him that Ben isn't hers - she was screaming at the top of her lungs by this point, but still. The H takes the word of a woman the h sees maybe twice a week and only knows she has a child and sorta suspected the H and h had hooked up in the past. The h was not her friend, they had nothing but an employer/employee relationship, and the h firmly denies Ben is the H's and he accuses her multiple times of lying. Just these little questions that kept popping up as I read this.) The h was angry when she agreed to marry the H, and his refusal to see things from her perspective and his dismissal of her feelings leaves her feeling pretty powerless and so she wants revenge. She also plans to drop the bomb about Ben at the appropriate time, like when she is filing for divorce. The H and h have an uneasy few weeks, she avoids him as much as possible, uses her own money to pay for her and Ben and when his lover calls, she sends the H off to her, thoroughly rejecting him. The H and h both declare they missed each other and mutual love, she shows him the adoption papers with him listed as guardian in the event of, and the H tells her he forgives her but to never mention this again for the HEA. A revenge scenario like this one requires a pretty huge betrayal and the reader's sympathy for the h in order to work.

Unbelievably cold h who is just as cruel as judas kiss h.

Sally Wentworth are famous for her vengeance-crazing heroines,a trope i really love.Her works "The Judas Kiss" and "Cage of Ice" are one of my fav books of all time,and all other books i read by SW have i rated 5-STARS,but this is the first book i have rated less than 5-STARS. I did feel sorry for Bruno, as he did truly love her and with Norrie i could relate to her furious hate towards Bruno,it was utterly fascinating watching those two clash after their marriage-Ahh but i LOVE hate-love relationships, and Wentworth made it so EPIC in her own way (smirk). One more thing is that i wish some questions could have been answered,but it seems that Wentworth really had to end it that way.For Bruno and Norrie in focusing in only loving each other,and yeah.

The heroine was a total bitch and a foolish ninny.

Now that she'd succeeded in rebuilding her life, she couldn't bear to sit idly by as history repeated itself--not when Bruno was trying to take control of more than just a newspaper..