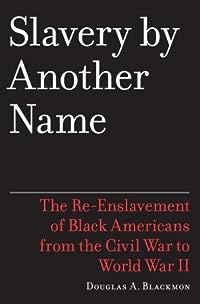 Slavery by Another Name: The Re-Enslavement of Black Americans from the Civil War to World War II

by Douglas A. Blackmon

Blackmon brings to light one of the most shameful chapters in American historyan Age of Neoslavery that thrived from the aftermath of the Civil War through the dawn of World War II.Under laws enacted specifically to intimidate blacks, tens of thousands of African Americans were arbitrarily arrested, hit with outrageous fines, and charged for the costs of their own arrests.

Thousands of other African Americans were simply seized by southern landowners and compelled into years of involuntary servitude.

Armies of free black men labored without compensation, were repeatedly bought and sold, and were forced through beatings and physical torture to do the bidding of white masters for decades after the official abolition of American slavery.The neoslavery system exploited legal loopholes and federal policies that discouraged prosecution of whites for continuing to hold black workers against their wills.

As it poured millions of dollars into southern government treasuries, the new slavery also became a key instrument in the terrorization of African Americans seeking full participation in the U.S. political system.Based on a vast record of original documents and personal narratives, Slavery by Another Name unearths the lost stories of slaves and their descendants who journeyed into freedom after the Emancipation Proclamation and then back into the shadow of involuntary servitude.

Read the Book "Slavery by Another Name: The Re-Enslavement of Black Americans from the Civil War to World War II" Online

I knew that racism and white supremacism never went away, but I never imagined the ways that slavery would just be adapted and re-legitimized after owning people as property was made illegal. And having a government that all but ignores reports of slavery always helps.

I don't know how America defined slavery but it was obviously in a fake and euphemistic way if the Government can say it ended in (variously, according to state) between 1863 and 1865 actually teach that lie in schools. Children have a right to know the truth if they are going to repair old enmities and move forward into a world which drops the divisions and sings that lovely old kiddies' song, 'the more we are together the happier we will be'.

Not all of it, of course, but living under slavery and having that followed by 75 years of government-ignored terrorism changes a culture and a people. Slavery and the vicious thing that followed it was a failure of our ability to believe what we could see: black people are just people. Yet there came a time when we decided that the overall wealth of the nation would be enhanced by the ability of black Americans to fully participate in our economic system.

Slavery by Another Name follows the life of Green Cottenham who was arrested on March 30, 1908 by the sheriff of Selby County, Alabama, and charged with vagrancy and in walking in his footsteps author Blackmon shared what hed learned about the politics of the day and how those politics and slavery were synonymous then as they are today. George Mason, July 1773 Virginia Constitutional Convention A few things I learned (passages taken directly from book) Unlike the victims of the Jewish Holocaust, who were on the whole literate, comparatively wealthy, and positioned to record for history the horror that enveloped them, Cottenham and his peers had virtually no capacity to preserve their memories or document their destruction. In the immediate wake of emancipation, the Alabama legislature swiftly passed a measure under which the orphans of freed slaves, or the children of blacks deemed inadequate parents, were to be apprenticed to their former masters. A few of the things you will learn Whites saw the money spent in black schools as the only viable source of additional funds for their own children. It was simply amazing to learn of the many ways those in power used to keep blacks in slavery after the signing of the Emancipation Proclamation.

It was emotionally wrenching and Blackmon painstakingly filled each page with names and scenarios of the most cruelest brutalitiesbecause he delved so deep into the research I found myself wanting to honor the men and women and children he had given name to by absorbing and reflecting as much as I could handle until I completed the book. The book begins with the search for the details of the life of one person, Green Cottenham, who was killed in a prison camp while still a young man in his 20s.

In the South they would pick African-American men off the street for non-existent offenses such as "vagrancy" or "offensive acts" - which could mean almost anything - convict them, charge them exorbitant fees that they couldn't pay, and then sell them to lumber mills, coal mines, and the rail roads to work off their debt. This only ended in 1941 because the country needed African-American men to fight in World War II and to actually believe in the cause and their country. He also tried to follow one family and man throughout the years of this new form of slavery and it didn't work at all.

The book meticulously documents how slavery continued "underground" after emancipation on a vast, all-encompassing scale through the various machinations of the US legal and corporate system, protected at every level under the broad umbrella of "progress", how the North turned a blind eye, and on and on.

This book now reveals the shame in the United States in race relations following the Civil War up to modern times. Most adults today would tell you that slavery was ended by the Civil War, followed by the Emancipation Proclamation and the 13th, 14th and 15th Amendments. Most educated people realize that the Emancipation Proclamation was more symbolic than practical in ending slavery, since it only applied to states which were in rebellion, and would have meant absolutely nothing had the North not won the war. The system of slavery was changed, and persisted, because of systemic prejudice in the lives of the people. It is because of this insidious systemic prejudice that slavery was allowed to exist, and continued in altered forms.

Everyone should read this book -- the fact that almost no one knows about one of the most horrific chapters in our nation's recent history is shocking.

Currently, he works as Atlanta bureau chief for The Wall Street Journal.