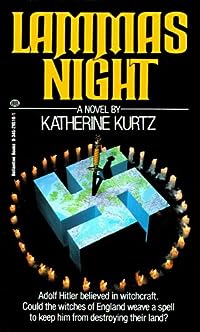 Hitler's Germany is about to employ the secret arts of evil witchcraft to destroy England.

A World War II spycraft novel, set during the Battle of Britain and incorporating a number of occult elements that were based on historical events, as well as the Divine Right of Kings and ritual succession and substitution and past lives. At that time, people who participated in occult rituals during World War II were still alive, but most had never spoken about their experience and were very reluctant to do so even to that day. Knowing the state of English weather, she asked that wherever she went, she would have clear skies and fair weather, and the people she interviewed said that it would happen.

Apparently, Hitler is an occultist, and some very boring English Wiccans are trying to stop him by convening a grand coven of witches on Lammas Night in the hope they can implant a suggestion for him not to invade Britain. There's a lot of gas about old pagan Britain, but very little action: English and German Witches never really come into direct physical contact, and the bulk of the book is about the relation between two men, one who might be a human sacrifice for the other.

There is a deep reverence for the many forms of the magical arts woven throughout this tale - an almost seamless blending of the mystical with the mundane which lends strength to the conviction of the characters' beliefs and practices.

evil book than Bitter Seeds. Before the war, William worked for Graham in intelligence and they became friends. As with most novels I read set in historical times, I wish there was a detailed afterward explaining how the historical events line with the events of the book. Now that I know where they are, I may read a couple of Kurtz other books I found in the unread pile, not to mention those four unread Deryni novels.

Here we have a strange "what if" scenario, set during 1940 when German invasion of Britain seemed imminent, and people in MI6 are desperate to protect Britain by every means possible. If you want to know a little of what to expect in terms of the occult: (view spoiler)there is hypnotism, reincarnation, blood sacrifice, black magic; there are references to old priest/priestesses, Qabalistic rituals, Rosicrucians, witchcraft and druidry; there are magical rites and suggestions that all religions are the same.

This is a re-read of a book I remember as a five-star novel, but which, coming to it again many years later, and with more mature eyes, I realize is rather flawed. (These days, so many books have dealt respectfully with the old religion that Lammas Night is by no means extraordinary; and the treatment has been done just as well in many places -- Im thinking of Falconstone, for a start: catch my review here on Goodreads) The thrust of the novel is that magic will be used to defeat Hitler on the level of psychological warfare. I must wonder why a good editor at Ballantine didnt just delete whole pages to solve this problem and get the story moving. Kurtz was far from a first-time author with Lammas Night, so she was allowed to get away with blue murder. Hmm.) The second problem is that the book was crying out to be vetted not by an English native speaker (which most Americans are) but by a *British* native speaker, and better yet, someone who was there during the War years. Its a whimsical mistake American writers might easily make, and which a British editor would have picked up and blue-penciled immediately. The polite form of address for a prince is Your royal highness, and subsequently sir, and in third person, his royal highness. This Prince William was also Duke of Clarence, and the polite form of address for a duke is Your grace, or in third person, his grace. Its a gay book with all intimacy deleted and for those of us who appreciate "honest" glbt novels like the aforementioned Falconstone, The Deceivers, whatever, the net result is more distracting than satisfying. A firmer editing hand would have improved it enormously, following which a quick vetting by a born-British editor would have pulled it up right into the five star bracket. *Sigh* Recommended if youre fascinated by the WWII era, and/or the occult, and/or bromance.

The event supposedly happened on Lammas Night, August 2, 1940. The book is set right around that time, where a local occult group now headed by one Sir John Graham (Gray) is trying to muster up support for that same event, only to meet rejection after rejection by members and heads of each different esoteric tradition.