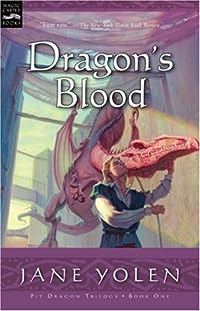 Dragons are trained to fight to the death, and two determined teens help free them in this spellbinding saga.Training a dragon to be a fighting champion is the only way to freedom for fifteen-year-old Jakkin.

It was bleak and boring from beginning to end, and I felt absolutely no sympathy for any of the clichéd characters. It felt like a cheap rip off of every fantasy novel since the birth of that genre (they even greet each other with a version of the star trek Vulcan salute!

------- I had to write a bit more in defense of this book after reading some of the harsher critiques written by others. So though it may not be the most sophisticated writing that ever graced the page, it is a beloved book that graces a place of honor on my bookshelf and always will.

Your dad gave you to me, and one day I'll have enough money that you'll gladly accept me as your master." *facepalm* She seems like the only decent character in the book, I hope she develops her medical skills and sells his kidneys on the black market while he sleeps.

We get a short excerpt in the beginning of the book about the planet Austar IV where the story takes place. I say useless because after reading this book I don't see how this information actually adds anything to the story line. So my issue with this book is there is very little, if any, world building. By the end of the book I've learned almost nothing about the world the characters inhabit. Since I initially skipped reading the excerpt at the beginning, let's look at what we learn from the book alone: 1. 2. The planet the people inhabit has dragons, which almost became extinct until the people stepped in and started to breed them to fight each other in pits. So after 292 pages, we actually learn less about the planet then we do in the excerpt. I only finished the book because I was hoping by the end I would learn more about the planet than the meager amount of information the author doled out. Why can people telepathically communicate with these dragons, when as far as I can tell, they're only native to this planet? If a person steals an egg that contains a dragon, you're still short a hatchling, you just don't know it. Jakkin dreams of one day being a master, our hero people. Before our hero, can steal an egg however, he's severely injured trying to kill a creature called a drakk, which kills and eats dragon hatchlings. He spends a year training this dragon to fight in the pits with the help of another bond slave named Akki. At the end of the year he has Akki register his dragon in it's first fight. There isn't a single moment in the book that our protagonist thinks maybe you shouldn't own people. In fact, we end the book with Jakkin dreaming of one day buying Akki.

really not that impressive a feat...) and then sets about training it out in the desert, but doesn't give any thought to how he's going to transport it to the fighting pits in the city. Of course it's a woman, Akki, who thinks about all these details, plus a million other things (including saving Jakkin's stupid life at least twice).

EDIT: A few days after posting this review it occurred to me that there is another merit to this book and potentially to the series. It might appeal to pokémon fans, since the main story is about raising a pet dragon to fight battles.

Entertainment, food, clothing, etc, all come from dragons. The book follows the story of a young bondsman, Jakkin, as he attempts to steal a hatchling dragon, raise it as his own, and train it to fight in the dragon pits. I'm torn on whether to let my girls read this because of the traditional male-centric way the story is told.

However, I found myself wishing the author had done more with the themes and issues that arose during my reading, such as slavery (the idea of a master and a slave), the treatment of the dragons (both in the pits, the training, and the horrible culling), and finally the achievement of a dream (was it really everything you wanted?). Most of my disappointments about Dragon's Blood, though, relate to the way Yolen translated some of the themes for a young person's mindset.

The humans are divided into free and "bond", where the bonded people constantly wear a bag to show their indentured status, and when they fill that bag with money they'll have enough to buy their freedom.