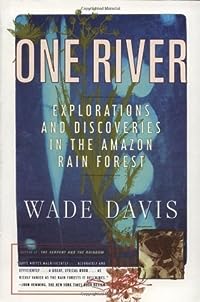 The story of two generations of scientific explorers in South AmericaRichard Evans Schultes and his protégé Wade Davisan epic tale of adventure and a compelling work of natural history.In 1941, Professor Richard Evan Schultes took a leave from Harvard and disappeared into the Amazon, where he spent the next twelve years mapping uncharted rivers and living among dozens of Indian tribes. In the 1970s, he sent two prize students, Tim Plowman and Wade Davis, to follow in his footsteps and unveil the botanical secrets of coca, the notorious source of cocaine, a sacred plant known to the Inca as the Divine Leaf of Immortality.A stunning account of adventure and discovery, betrayal and destruction, One River is a story of two generations of explorers drawn together by the transcendent knowledge of Indian peoples, the visionary realms of the shaman, and the extraordinary plants that sustain all life in a forest that once stood immense and inviolable.

Read the Book "One River" Online

Ames noted that in the five thousand years of recorded history not a single major crop had been added to the list of cultivated plants. With the origins of maize and beans, peanuts and tobacco lost in the shadows of prehistory, it was simply unrealistic to assume that agriculture had emerged in the New World within the past ten thousand years.

One River is a story developed in the Amazon basin, reflecting the medicinal and spiritual life of indigenous communities. Both Tim and Wade were Schultes' students in Harvard, and the three of them play the central role of telling the many stories articulated by One River, the Amazon. All these peoples, all these languages, have developed a deep communication with the plants, with the rivers and the forests. What I find strange (and to some degree disturbing) is to see that One River is written in English, based on the communication that the Spruce and Schultes managed to develop in the local indigenous languages.

Rich and complex rituals and myths evolved as an expression of the covenant between the animals and humans, a means of containing within manageable bounds the fear and violence of the hunt and maintaining a certain essential balance between the consciousness of man and the unreasoning impulses of the natural world." I appreciate that Davis shared the story of his mentor and teacher, Richard Schultes. Not only does Dr. Davis share the fascinating story of his mentor, but he intertwines it with his own experiences in the jungles, the history of Europeans in the region and the uses of various plants.

The meat of the narrative is two parallel explorations of the northwestern Amazon and western South America: one, Davis and his colleague tracing the earlier discoveries and collecting expeditions of their mentor, Richard Schultes; the other story is Schultes' journeys throughout the region a few decades before.

Take a lot of plants, trees, seeds, some of them hallucinogenic, some known, lots unknown, a dog, Botanys answer to Indiana Jones, his brightest student and another wide eyed yet equally capable student, Rubber, Orchids, Coca, a cast of incredible and wonderful characters and a sizeable chunk of South America and slowly drift down the Amazon river, from one end to the over, from one tributary to the next, and you have, well you have a lot more than One River, I have to say. Much like the river of the title, I imagine anyway, this is a big, sprawling book that seems to be a biography, a travelogue and a study of medicinal and hallucinogenic plants mashed in a great mortar and pestle and pressed onto the pages. Ostensibly dedicated to the memory of Tim Plowman, Wade Davis has written a detailed biography of Richard Evans Schultes (who has become a hero of mine on the basis of this book), as well as the histories of rubber and Coca and their impact, the lives and roles of Indians in the Amazon basin and beyond, and their incredible knowledge and understanding of the world around them. In complete naivety I came to the book to read about the Amazon and despite thinking I would enjoy the travelogue parts, it is in fact the biography of Schultes that I grew to love, a man with a passion and curiosity for plants that drove through almost any obstacles that nature or man placed in his way which I could only admire more and more throughout the book. The switching between Schultes and Davis would have been easier to keep pace with without the additional history of subjects related to where they were or what they were doing, this all made One River feel like three different books. He began by injecting the poison into the shoulder of a female donkey. These traits influenced both Davis and Tim Plowman, who spent his life researching Coca, before the narcotic derivative took over the known world and forever tarnished a nutritional stimulant used by people for thousands of years before it became a good time drug for everyone.

Woven throughout is an incredible amount of information about the various native tribes and peoples that all three of these main characters (Schultes, Davis, Plowman) interacted with. Davis mentions in the epilogue that he used Schultes' extensive photograph collection to infer much of the book's content; for example, to determine what people were wearing, what they might have been doing or where they were on a given date, and how they were using plants (e.g., by looking at whether a man was carrying a coca pouch).

Mostly through the Harvard Botanical Museum, he spent more than three years in the Amazon and Andes as a plant explorer, living among 15 indigenous groups in eight Latin American nations while making some 6,000 botanical collections. Davis is the recipient of numerous awards, including the 2002 Lowell Thomas Medal (The Explorers Club) and the 2002 Lannan Foundation prize for literary nonfiction. A professional speaker for nearly 20 years, Davis has lectured at the National Geographic Society, American Museum of Natural History, Smithsonian Institution, and California Academy of Sciences, as well as many other museums and some 200 universities, including Harvard, MIT, Oxford, Yale, and Stanford. An honorary research associate of the Institute of Economic Botany of the New York Botanical Garden, he is a fellow of the Linnean Society, the Explorers Club, and the Royal Geographical Society.