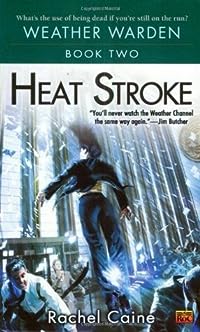 Mistaken for a murderer, Weather Warden Joanne Baldwin is hunted down and killed by her colleagues. Reborn as a Djinn, she senses something sinister entering earth's atmosphere-something that makes tomorrow's forecast look deadly.

A lot of time is devoted to Joanne's relationship with David, who has made her into a djinn, since she died horribly in the last book. They spend a lot of time getting to know each other, with the major objective of David trying to teach her to be a djinn. Joanne loves her connection with David, and likes being a djinn, although it's very intense--their perceptions are a lot more intense than humans, and it throws her for a loop. I love my romance, but not as so much of the focus in an urban fantasy book. Joanne finds out the hard way the worst part about being a djinn, when she gets claimed by a very troubled teenaged boy, under the guidance of the stepmonster from Hell, a woman that David hates with a burning passion. Ms. Caine manages to skillfully weave this story with a rich mix of action, angst, sensuality, and the power of loves lost and found. Lewis (who I also love), Joanne's old flame and friend, and the most powerful Warden on Earth, has a big role, which looks like it will play out heavily in the next book.

Joanne, once a powerful, yet impulsive Weather warden is now a Djinn. Jo now must leave all things human behind(which she finds easier said than done) and learn how to be a djinn. Again like the first book, I love the idea of the Weather Wardens and really find this series fresh and unique.

Okay Jo is back, she is now a Djinn.

I'm sorry because I blew about $35 on 4 of these books at once on the say so of an enthusiastic fan who insisted that I "must buy" the first 4 because they run together and I'd regret it if I didn't. I was told that if I liked the Butcher Dresden books I'd like these...not so. I rate the Dresden books as some of my favorites...these, the last 2 will join the first 2 in the "to be sold box" without being read. I am sadly disappointed with these books and will be very careful about what I buy on the advice, "if you like Harry Dresden you'll like these" in the future.

Joanne is so full of snark and nonsense that I really don't see how I could NOT love her. As to the story itself, there were many times that I saw things coming - and several that I kicked myself because I *should* have seen them coming. One of the failures (at least to me) was the whole "we fixed the world in the last book, but what we did broke the world again" syndrome that appears to me to be happening in this series. I loved Joanne.

Another example where when they made their way to the aetheric planes, I skimmed.

I feel like this series has incredible potential, but just hasn't... Lewis, like the rest of the series as a whole, feels like he just can't get it together. But I feel like it is time to ... But then at the same time, they behave like they are twins to the Wardens. I am tired of having every single character in this book be an enemy. Even ones who don't intend to be - Lewis, David - still cause harm by making decisions that have horrible repercussions for Jo (let me bind you to my bottle, it's safe, I promise; let me tear the universe asunder for you, I am sure that can't be as bad as it sounds, right?). She's surrounded by people who either leave her dealing with consequences not of her own making (Lewis, David, Jonathan), or think she's the Devil Incarnate and is single-handedly calling down the End of Times (all the Wardens, a good handful of djinn, and even herself on occasion with all the "it's my fault" whining...