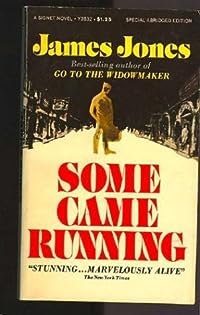 Returning to Parkman in early middle age and after an absence of 19 years, Dave Hirsch finds himself a misfit, an embarrassment to his brother who is climbing his way to wealth and position in the town.

His failure is mirrored by the failure of Gwen French, his friend and literary adviser, to disown the reputation which stands between her and happiness.

Bewildered and unsure of himself, Dave finds his friends among the gamblers and colorful characters of Parkman's lower world, but their rough honesty is unable to prevent the final disaster.

I read James Jones' first novel, "From Here To Eternity," a few years ago, and was impressed by it, and finally recently got around to reading his second, "Some Came Running." Long out of print, I found some copies on half.com and ordered one up, only to find, upon its arrival in the mail, that I'd ordered the abridged version. I did a little research and found that the abridged version was first published in 1958, the year after the novel came out, in order to coincide with the film adaptation released at the time. Normally, that's how I like to do in cases where I haven't read a book or seen its film adaptation: one after the other. At the outset, it seemed unlikely a film version of this book would work, not only because of the length and the constant profanity (which you couldn't get away with in 1957, of course), but because chief among the novel's themes are sex and writing, and how sexual thoughts and needs affect the creative mind. Normally I can judge a movie based on its own merits, but I think that this time around, having spent over a month reading this wonderful book, I was too taken aback by the movie's different ideas and themes to enjoy as well as I could have. This was evident in "From Here to Eternity," where "can't" is written as "cant," and "readin'" is "readin"--but is even moreso in "Some Came Running." From what I understand, he abandoned this style later in his career (though I have no personal knowledge of that, as I have yet to read his later works).

I am yet under the spell Some Came Running put on me fifty-two years ago. This is when I learned not only that Some Came Running had been out of print for over half a century, but that a newly abridged edition appeared just last year. Curious to see the impressions of others who'd returned to Some Came Running via this abridgment, I read a few of the customer reviews on Amazon.com. I am speaking more from instinct and with hindsight than from certainty here, but I believe my father resisted edits because, expecting a harsh response from what he considered the snooty 'ivory tower' literary establishment, he decided to thumb his nose at it in every way possible. Kaylie Jones's revelation also explains in partfor me, anywayher father's genius for getting under social pretension and into the marrow of his readers' souls, enabling me to thumb my nose at such contemporaries of Jones as Norman Mailer and William Styron. Some months before my first reading of Some Came Running I had come across a piece of nasty gossip Mailer published about Styron reading aloud at a dinner party some of Jones's work (in his absence) and making fun of it. Simply put, Some Came Running is more real to me today than anything I have read by Mailer or Styronand not only because I've just finished reading it again. It was top-tier, original literary writing, which no doubt dazzled the hell out of me at the time I read it, but which has not remained with me at any depth. Best-selling novelist Elmore Leonard in the most oft-repeated of his ten rules of writing said, If it sounds like writing, I rewrite it. If this sounds cynical, here's an insightful squib from the introduction to a published abridgment of his journal, Time out of Mind: I believed the notebooks contained 'real feelings.' not social feelings. It was a little distracting at first in the reading, and I really see no artistic need for it, but eventually if I noticed it at all I found myself enjoying the author's little literary bird flips.) Come to think of it, there's something more particular within the world of Some Came Running that's held me prisoner all these years, although the ambience of the fictitious Parkman, Ill., tickles so many memories of my own hometown in Wisconsin I'm sure it is part of its hold on me. But the real, inclusive grip Some Came Running has on me, has on my heart and most likely always will, is a kitchen. It's the kitchen in the house where Gwen lives with her father, English professor/poet Bob. It is where they spend most of their time when they're home, where they entertain Dave and help him with his novel on his many many visits to the place they call Last Retreat. It's where Dave confronts Gwen, and later Bob, beseeching them with his own anguish over the tortured incomplete love affair.

I'd wanted to read this for some time, but I've never actually seen a copy in the UK, and also there are three different versions of it out there, making it difficult to decide which to read. In "Some Came Running", we get to know quite a number of characters probably better than we get to know almost anyone in real life - so well, in fact, that it almost makes you feel a little queasy at times. Martin was very good in the film, but I actually found that 'Bama came across as less unpleasant in the book! If I mention "The Thin Red Line", people have no idea it was ever a book.

If you are familiar with Mr. Jones' realistic and gritty writing style, you know better than to hope that everyone will live happily ever after.

James Jones' sense of the unhurried story is similar to Herman Wouk's novels, in a way that I do not find in current writers.

Yes, I think it was unnecessarily looooong, but now that it's over, I'm reading James Jones other novel "From Here to Eternity" that's almost just as long.

His last novel, Whistle, was based on his hospital stay in Memphis, Tennessee, recovering from his wounds.