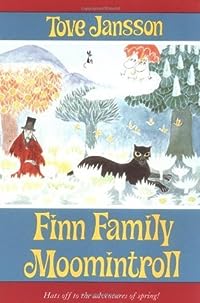 It is spring in the valley and the Moomins are ready for adventure Moomintroll and his friends Snufkin and Sniff find the Hobgoblin's top hat, all shiny and new and just waiting to be taken home. They soon realize that his is no ordinary hat; it can turn anything--or anyone--into something else

There isn't a stamp, or an error that I haven't collected. However, by accident we discovered that one can collect the same stamp twice, and be a happy Hemul. When we started comparing and contrasting with whom we identified most, I added some valuable memory stamps to my rich collection of "reading with my children".

I liked, but didn't love Comet in Moominland.

And considering how much I personally have always and repeatedly enjoyed the 1970s German translations of precisely this same book (and others of the Moomintroll series), I do absolutely believe that it is mores than likely Elizabeth Porch's to and for me rather mediocre translation that has caused this rather annoying sense of disconnection and being on the outside looking in (and yes, at times even tedious boredom, something that I certainly NEVER once experienced with Vivica and Kurt Bandler's always engaging and adventuresome renditions of Jansson's original Swedish).

Thanks to all the members of the Children's Books group who kept me motived to continue reading by explaining why they loved this book/series in this thread: http://www.goodreads.com/topic/show/3..., and who also gave some specific information helpful to enjoying the story, including a link to a character list. If not for the help I received from the Children's Books group members in understanding the book and its background, I doubt I'd have enjoyed it at all. It didnt help that I needed a magnifying glass to read the letter to the reader and the map (yes, this book does have one of my beloved maps!) at the beginning of the book. I eventually warmed to the characters, though I do wish I had first read the book where they were first introduced: Comet in Moominland because I might have enjoyed them from the beginning rather than being confused by them; in this book there is a lack of introduction to the world/characters. I will keep thinking and if I ever read the earlier book, Ill try to reread this book too and see if I like it any better the second time around.

You want to change gender, go right ahead none of my damn business. When my family went to Sweden when I was in third or fourth grade, I was given copies of Janssons children books and really, really read them. Seriously, I know this because I just re-read the first one, and you can tell it was well loved.

Which ended up being only one book, unfortunately: Finn Family Moomintroll. The illustrations are adorable, and the names of the characters fun to say---the Snork, Hattifatteners, Thingumy and Bob--and in Finn Family Moomintroll, each of the chapters tells of a self-standing episode, although they are linked by the device of the Hobgoblin's hat. On the first spring day the Moomins awaken from their hibernation, and Moomintroll decides to go on an expedition to the mountains with his friends, Sniff and Snufkin. Though I never found him as cute as the Moomins---he always looked to me like a scarecrow, only wearing a smock---Snufkin was probably the character I identified with the most as a child, specifically because he was balanced the joy of spending time with friends and the peace of being alone.

The troll toy craze first arrived in the UK around 1962. I did not encounter Moomintroll and friends however until a year or two later and did not really associate the two in my mind. My toy was a troll...