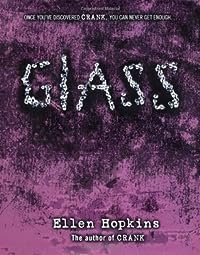 Whatever you call it, it's all the same: a monster.

Kristina thinks she can control it.

But the monster is too strong, and before she knows it, Kristina is back in its grips.

She needs the monster to keep going, to face the pressures of day-to-day life.

Once again the monster takes over Kristina's life and she will do anything for it, including giving up the one person who gives her the unconditional love she craves -- her baby.

The sequel to Crank, this is the continuing story of Kristina and her descent back to hell.

Kids reading this book might actually get the crap scared out of them enough to stay the heck away from drugs!

In this follow-up to Kristina's sordid tale, she continues to chronicle her life with the monster (crystal meth). She's able to construct a linear narrative out of a series of concrete poems where readers become entangled in all of Kristina'a dilemmas.

I actually found this one to be a bit more believable in terms of the way her addiction played out, and while it could have been just the same plot re-hashed, it definitely didn't feel that way to me. While these books could definitely read as anti-drug propaganda, Hopkins really does a good job of balancing the "drugs are bad" message with story, characters, and her great verse.

Probably Bart, anyway so they made this cardboard cutout of an angel and they lowered it through the window on strings, to mess with Ned Flanders's twins. So they were messing with the twins making the angel float around and William H Macy animated alter-ego's sons were going like; we are not worthy, we are not worthy, bowing and such. Another thing, if you are going through a reading slump, a term I personally dislike and do not accept, much like how religious/conservatives do not accept climate change, then read this novel. This book is pretty much like a car wreck, you watch as our MC heads toward certain disasters, and is basically disastrous in nature. This is a harrowing read, but it ends right and like I always say, but don't say it enough.

I felt like the writing wasn't as passionate as it'd been in the first book, and I could no longer feel badly for Kristina/Bree. I swear, how did she find all these guys who did drugs and liked her?

This book is like watching a car crash you can't stop until it's too late to reverse, no matter how much you want to yell at the driver "For the love of all that's holy, please STOP." Only thing I can say was that watching Kristina's descent was heartbreaking, and probably for more than one angle of it all. Full review: "You can get addicted to a certain kind of sadness Like resignation to the end, always the end So when we found that we could not make sense Well you said that we would still be friends But I'll admit that I was glad that it was over." - "Somebody That I Used to Know" - Gotye Thought it was appropriate to quote these lines from this song since it was in my head as I started meditating over my thoughts about "Glass." I'm still shaking and a bit misty eyed even in the aftermath of reading this because - watching someone fall this hard while in a seemingly endless cycle of addiction to drugs is not easy in any measure, whether in fiction or in real life. On another, Kristina is seriously hard to follow and sympathize with because of her actions - between the increasing distance she puts between herself and her family, her irresponsibility around children (whether her own child or others, and that was one of the things that made me angry as I read this - more on that in a little bit), her addictions, her quickening temper/recklessness, and just the overarching moral descent where she'd do anything to get her next "hit" or establish her life where it's just coasting the surface for the moment - nothing permanent, mostly temporary gratification. I said in my initial notes that reading this book was like watching a car crash where you can't do anything but watch it as it unfolds. I'm not going to spoil which route the story takes in case people want to read this series for themselves, but while I was surprised by how it reached that point, I wasn't surprised that it'd go the route it did. This book also deals with unresolved conflicts Kristina has from the previous novel in her relationships (reunion with the father of her child, etc.) I was left with much to think about at the end of this novel - long story short. The poetic styling of this wasn't as easy for me to tell as the last book, but I thought Laura Flanagan did an excellent job on the audiobook reading, particularly with the inflections of emotion and enunciation she gave in the process.

Glass is the sequel to Hopkins's first novel, Crank, in which Kristina, a former honors student, experiments with tobacco, alcohol, and meth while visiting her lowlife dad for the summer.

Major triggers for any kind of addiction, particularly drugs.