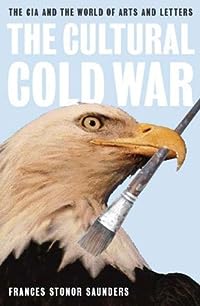 The Cultural Cold War: The CIA and the World of Arts and Letters

During the Cold War, freedom of expression was vaunted as liberal democracys most cherished possessionbut such freedom was put in service of a hidden agenda. In The Cultural Cold War, Frances Stonor Saunders reveals the extraordinary efforts of a secret campaign in which some of the most vocal exponents of intellectual freedom in the West were working for or subsidized by the CIAwhether they knew it or not.Called the most comprehensive account yet of the CIAs activities between 1947 and 1967 by the New York Times, the book presents shocking evidence of the CIAs undercover program of cultural interventions in Western Europe and at home, drawing together declassified documents and exclusive interviews to expose the CIAs astonishing campaign to deploy the likes of Hannah Arendt, Isaiah Berlin, Leonard Bernstein, Robert Lowell, George Orwell, and Jackson Pollock as weapons in the Cold War. Translated into ten languages, this classic worknow with a new preface by the authoris a real contribution to popular understanding of the postwar period (The Wall Street Journal), and its story of covert cultural efforts to win hearts and minds continues to be relevant today.

Read the Book "The Cultural Cold War: The CIA and the World of Arts and Letters" Online

You know all that paranoia that besides politics and economics, the CIA also has infiltrated all kinds of cultural institutions -- academic journals, music, international academic conferences, popular journals, export of popular music? Read this book and weep.

A fine, readable book on the CIA programme to fund allegedly leftist/high cultural movements during the first half of the so called cold war. It hardly surprises one that those shady characters sold their souls to the CIA. While it is undoubtedly an important and interesting book, constant immersion in the activities of such entities as the Congress for Cultural Freedom, Encounter, CIA, MI5, Information Research Department,etc can have a dampening effect on your soul.

A lot of Saunders' analysis focuses on journals like "Encounter", "Partisan Review" and others, and the wide-ranging cast of intellectual and morons in government and intelligence work who tried to manipulate a whole generation of artists into working under the thinly-veiled funding and auspices of the CIA.

This book is written for an audience that already knows something about the Cold War and US politics in the 1950s, and for me it was an uphill climb since I know little about this period in American history.

Ishmael Reed, Mumbo Jumbo (1972) This 1999 book by British journalist Saunders is the classic account of the CIA's semi-secret mid-20th-century sponsorship of cultural organizations, literary and political journals, artistic movements, and related ventures (including films and political campaigns) throughout the world to combat the influence of communism. Taking the form of a narrative history, The Cultural Cold War focuses on three men who were the relays between seemingly independent artists and intellectuals and the American (as well as British) intelligence services. Saunders's stars are Melvin Lasky, a Bronx-born and City-College-educated militant anti-communist who became a prominent editor in Germany after World War II; Nicolas Nabokov, cousin to the more famous novelist Vladimir, a White Russian émigré and flamboyant composer who would go on to be at the center of the artists and writers knowingly or unknowingly recruited to fight communism; and Michael Josselson, descended from an Estonian Jewish family exiled after the Russian Revolution, who became an American citizen and then an intelligence and psychological warfare expert overseeing the Agency's domination of arts and letters. While The Cultural Cold War is a dispassionate book with a minimum of editorializing, Saunders seems to reserve most of her judgment not for the intelligence officers, but for the artists and intellectuals themselves. The CIA was instituted in 1947, an outgrowth of the wartime OSS (Office of Strategic Services), and it became a tentacular and autonomous bureaucracy operating unaccountably worldwide.Its motivation in waging a cultural Cold War was to recruit a "non-communist left." Understanding the appeal of dissidence to artists and thinkers, and understanding too the pre-war attractions of communism during the 1930s, the CIA grasped that keeping rebellious intellectuals in the fold of liberalism would be crucial to ensure the success of "the American century." To that end, they funded a European organization called the Congress for Cultural Freedom, the famous British liberal literary journal Encounter (edited by Stephen Spender and Irving Kristol), and art and music exhibitions meant to emphasize the progressive side of American culture to European audiences skeptical that America had a culture at all. Saunders emphasizes that the CIA really did represent the liberal side of the internal American debate over how to handle the Cold War, referring to "many romantic myths about the CIA as the extension of the American literary liberal tradition." The men she writes about were generally horrified by the know-nothing populism of Joseph McCarthy, while a number of presidents, including Truman and Johnson (but excluding the suave would-be Pericles Kennedy), resented intellectuals, distrusted modernist art, and would have preferred a more populist cultural ethos of God and country. Part of this book's sly comedy comes in the intelligence elite's sometimes uncomprehending interaction with the "new class," primarily Jewish intellectuals, but in the background there is also the emergence of Catholic writers and black artists and postcolonial talents, all of whom the CIA recruited as a bludgeon against communism. Saunders tentatively concludes that when American intellectuals, even those who had gone along with the cultural Cold War, turned against Johnson over Vietnam, he ordered the plug to be pulled on the operation, judging that "'liberals, intellectuals, Communiststhey're all the same.'" The CIA's cultural activities were exposed in a California-based radical magazine called Ramparts, and later reported in the New York Times. (I myself am paid in part with taxpayer funds.) Nevertheless, we give up this ideal of artistic and intellectual independence, the true meaning of "cultural freedom" betrayed in practice by the Cold Warriors, at the risk of relinquishing whatever social power we still have. Saunders's old-fashioned idealism, like the blurbs on the back of the book from Edward Said and Lewis Lapham, wistfully calls to mind an "ideological formation" (to use the comrades' jargon) that scarcely exists in this country any longer, a non-communist left worth supportingnon-communist not because it represents Cold War managerial liberalism (the "snivelling, mealy-mouthed tyranny of bureaucrats, social workers, psychiatrists and union officials" Saunders quotes William S.