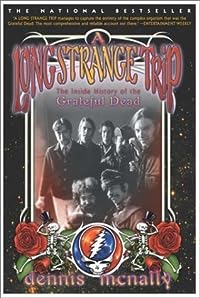 A Long Strange Trip: The Inside History of the Grateful Dead

The complete history of one of the most long-lived and legendary bands in rock history, written by its official historian and publicista must-have chronicle for all Dead Heads, and for students of rock and the 1960s counterculture.From 1965 to 1995, the Grateful Dead flourished as one of the most beloved, unusual, and accomplished musical entities to ever grace American culture.

To those in the know, the Dead was an ongoing tour de force: a band whose constant commitment to exploring new realms lay at the center of a thirty-year journey through an ever-shifting array of musical, cultural, and mental landscapes.Dennis McNally, the bands historian and publicist for more than twenty years, takes readers back through the Deads history in A Long Strange Trip.

In a kaleidoscopic narrative, McNally not only chronicles their experiences in a fascinatingly detailed fashion, but veers off into side trips on the bands intricate stage setup, the magic of the Grateful Dead concert experience, or metaphysical musings excerpted from a conversation among band members.

But McNally carries the Deads saga through the seventies and into the more recent years of constant touring and incessant musical exploration, which have cemented a unique bond between performers and audience, and created the business enterprise that is much more a family than a corporation.Written with the same zeal and spirit that the Grateful Dead brought to its music for more than thirty years, the book takes readers on a personal tour through the bands inner circle, highlighting its frenetic and very human faces.

Read the Book "A Long Strange Trip: The Inside History of the Grateful Dead" Online

Not at all unwilling to call the boys out on their bullshit, including crap records and shows -- but also written by someone who worked for the band as their publicist for years and definitely understood every aspect of their ethos and relays it perfectly, for the most part -- I only felt things were very occasionally slightly discolored by the author's (I wanted to write "narrator's," as though the book were written by a figment of the band's collective consciousness) choice to refer to himself in the third-person as "Scrib" instead of simply opting for the less intrusive "I," and sometimes his conservative deployment of full-throttle lyrical description of the music didn't match my understanding of the songs or the playing, especially in terms of chords and notes et cetera (I won't go back through to search for examples -- just that sometimes I felt like the flights of ecstatic descriptive fancy were technically a little off). The best bits were about how the songs came together, how Jerry's old bluegrass/folk friend from Palo Alto came back around with lyric sheets that saved them from having sub-mediocre psych lyrics like in "Cream Puff War" and really made the band what it is, as much as the long jams built on what Lesh called "bleshing," all five or six or seven players playing like the fingers on a hand, all unified. And of course there's everything about Jerry's physical dissolution that started when he started smoking heroin during the '77 spring tour -- found it very odd that the significance of that tour wasn't really covered and realized that its absence probably gave Peter Conners the idea to write the excellent Cornell '77: The Music, the Myth, and the Magnificence of the Grateful Dead's Concert at Barton Hall, which I read before this and loved, which ultimately is why I decided to read this, because I wanted to delve deeper into all this, a nostalgic trip for the soundtrack and experiences of my mid-to-late teenage years I'm more than happy to revisit and appreciate these days again from a completely different perspective, on the other side of so much other music listened to and loved and so many other bands seen live -- to quote promoter Bill Graham: they're not the best at what they do, they're the only ones who do what they do.

If there is anything you learn about the Dead in this book is that it is all about the music.

One of the funniest stories McNally told is when the band members were in Washington D.C. in 1993 and were taken on a tour of the White House by Dead Head Al Gore (who was dressed in a three-piece suit), Jerry Garcia wore sweatpants that day. The perpetual drug scene around the band, their disorganization, and just flat out weirdness turned a lot of people off, and I can completely understand why someone wouldnt like their music. As for me, I consider myself to be the biggest Dead Head who never got to see them in concert.

Widely considered to be the ultimate compendium for Grateful Dead history, Dennis McNallys A Long Strange Trip: The Inside History of the Grateful Dead is an extremely dense book. It has taken me a long time to finish it, but it was extremely well-written and contained a lot of information that I did not know prior to picking it up. I wish it hadnt taken me so long to read, but at times it felt like information overload - I mean, I love the Dead but I dont need to know absolutely everything!

A more skilled biographer, or perhaps one not so intimately linked to the Dead (McNally served as their publicist.), could have crafted this into a very powerful, if difficult, object lesson for an entire community. As it stands, there's plenty of unique tidbits in here that make it important for anyone trying to understand why the Dead meant so much for so long to their audience, but hard to wade through if you're not a Deadhead.

The book moves along at a good clip and covers all the bases in the Dead's world, touching on the music, the personalities, the ups and downs, the conflicts, the changes, the romances, the politics, the relationship between the band and its fans, et cetera.

Their influences (Jugband, Classic Rock, Jazz, Blues, Country and Bluegrass) have provided the starting point for many of my investigations into the various facets of American music.