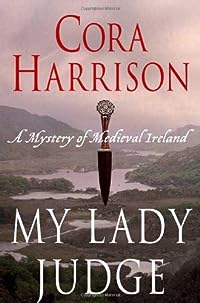 In the sixteenth century, as it is now, the Burren, on the western seaboard of Ireland, was a land of gray stone forts, fields of rich green grass, and swirling mountain terraces.

It was also home to an independent kingdom that lived peacefully by the ancient Brehon laws of their forebears.On the first eve of May, 1509, hundreds of people from the Burren climbed the gouged-out limestone terraces of Mullaghmore Mountain to celebrate the great May Day festival, lighting a bonfire and singing and dancing through the night, then returning through the gray dawn to the safety of their homes.

Despite its harshness, the Burren has been occupied for thousands of years and is home to some of Irelands finest megalithic sites. The whole community has assembled at a sacred site to attend the neighbourhood session of the Celtic law court, presided over by the remarkable woman Mara ODevoran, the Brehon, or judge, of the Burren. It seems that most of the community had walked past that body during the Beltane celebrations, but nobody reported it to the Brehon for investigation. The whole premise of crime, guilt and punishment under Brehon law had at its core a very different set of beliefs and mores. This aspect of the novel certainly set me thinking The lesson that emerges from this pleasant, very readable, low-key crime novel is that human nature does not change, despite the circumstances.

Here we see Ireland - so often an afterthought in English history books - at the time of Henry VIII's ascension to the throne, undergoing some cultural changes and seeing the threat of becoming nothing more than an English province, potentially losing hundreds of years of legal judgements and history.

Set in medieval Ireland, a historical-fiction mystery; featuring Mara, a Brehon, or judge, for the kingdom.

While the Sister Fidelma books take place in the seventh century, at a time when the Irish Celtic church was beginning to go head to head with the Roman church, this series is set just after Henry the Eighth has become king of England. Mara is a Brehon, a judge, of the Burren, a rather remote and austerely beautiful part of Ireland. Unlike Sister Fidelma, who only has Brother Eadulf trailing in her wake and occasionally saying something useful, Mara makes full use of her scholars, who are of various ages and levels of intelligence.

That was what happened with this book, I read a review somewhere and thought it might be interesting. The story is set in 16th century Ireland, Mara O'Davoren is a Brehon, a judge in the kingdom of Burren, and she runs a law school.

It was interesting to read this book, given that one of my favorite historical series is Peter Tremayne's Sister Fidelma series, featuring another Brehon but taking place nine centuries earlier.

(I wish Goodreads did half stars.) This book is set in the Burren, in western Ireland, in 1509 and focuses on Mara, a female Brehon (judge/law officer) in Gaelic Ireland and her investigation into the secret and unlawful killing of her assistant.

She's the only female Brehorn in Ireland (a divorced one at that) and responsible for a law school (where they started their legal education at 8 years old....) and trying and judging all local legal cases.

I would highly recommend this series to those who enjoy reading about Medieval Ireland or the Peter Tremayne series.