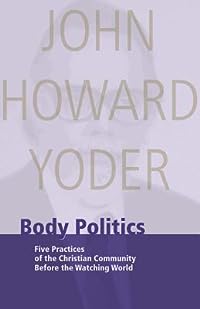 Body Politics: Five Practices of the Christian Community Before the Watching World

Some of them are still echoed in the practice of the church today.

Read the Book "Body Politics: Five Practices of the Christian Community Before the Watching World" Online

The metaphysical significance of the Eucharist is that it is the way in which Christians formally accept the sacrifice of Christ and therefore the grace of God. When I say that the traditional view (what Yoder calls the "sacramentalist" view) does not have operational significance, I mean that it appears largely ancillary that this formal acceptance is expressed through the eating of bread and the drinking of wine. The operational significance, as Yoder describes it, is in the communal sharing of economic goods. The reason that the Eucharist is conducted through the eating of bread and the drinking of wine is that Christ commands us to share with those in need; it is by this action (both in the Eucharistic setting and in the broader world) that Christians accept the sacrifice of Christ and therefore the grace of God. It is significant that the Eucharistic bread and wine are not merely symbolic of economic goods, but are in fact economic goods themselves. The sharing of economic goods is a way in which Christians can declare the presence of God's kingdom to the world at large. I think a natural criticism would be to say that Yoder's view takes the "religion" out of these practices--once you draw out the operational significance of these practices so clearly, in a way that is intelligible even to non-believers, what role is left for God, for spirituality? God is also present when non-Christians share economic goods in common; his presence is just not recognized as such. What struck me in reading this book was that, although Yoder never addresses the topic, all five of the practices he discusses would seem to foster the church community's resilience.

"What the New Testament is talking about wherever the theme is "breaking bread" is that people actually were sharing with one another their ordinary day-to-day material sustenance. It is not enough to say merely that in an act of "institution" or symbol-making, indepedent of ordinary meanings, God or the church would have said, 'Let us say that 'bread' stands for daily sustenance.' It is not merely that, as any historian of culture or anthropologist will tell us, in many settings eating together 'stands for' values of hospitality and community-formation, said values being distinguishable from the signs that refer to them. When in most of his post-resurrection appearances Jesus took up again his wonted role of the family head distributing bread (and fish) around his table, he projected into the post-Passion world the common table of the pre-Passion wandering band, whose members had left their prior economic bases to join his movement...That basis needs are met is a mark of the messianic age" (20-21).

There are as many ministerial roles as there are members of the body of Christ, and that means that more than half of them are women. Only that would live up to Paul's call to 'lead a life worthy of our calling'." Now that's a church I want to belong to and that I want the world to know about.

There is something profoundly freeing about Yoder's ideas here, one that trusts the Spirit to guide the church into all truth, one that respects the individual dignity of each human being, and one that calls for the church to be a place not where one works out one's personal relationship with Jesus, but where one has, by following Jesus, entered into a community of people designed to effect transformation in one's life.

This itself would be understandable if it did not shortchange Yoder on his own thesis--that the defining practices of Gospel community (binding and loosing, table-sharing, baptism, egalitarian ministry, and open meetings) are culturally and politically transformative.

In this very short book (80 pages!), Yoder looks at five practices of the Christian community. Fifth, and going along with the fourth, is the idea of open meeting.

The reason I enjoy reading Yoder, even though I dont consider myself a Christian, is that he promotes universal principles.

In it Yoder lays out 5 practices that are laid out for the church in Scripture.