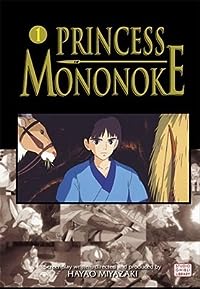 Set in the Japanese countryside of the law and chaotic Muromachi Period, PRINCESS MONONOKE is the story of a young man's quest to reconcile the powerful forces of human civilization and industry with the need to live harmoniously in the natural world. It is a time when Samurai warriors raid each others' territories whenever they sense weakness or advantage. Men and women driven from areas of conflict have begun to eke out their livings in even the most remote forests where the gods of old still rule the land.

After meeting Ashitaka, her heart sways between the Gods and humans.

The belief that spirits are inherent in these natural phenomena is also seen in traditional Japanese childrens stories which are loaded with animals and spirits who rescue the weak and downtrodden, deliver justice to the powerful or simply create general nuisances. Though you may not have noticed during your brief sojourn here to interview the hermit-like director, Hayao Miyazaki, it is nearly common knowledge that the Japanese archipelago is home to numerous active volcanos and frequently shaken by devastating earthquakes. The process of nuclear fission and resultant radiation was thought by the Japanese to represent an aspect of the natural environment, albeit an aspect that had been twisted by humans in a way that went against the law of the natural world. This singular event of horror became a lesson burned into the minds of many Japanese about the prideful manipulation of the natural environment by humanity. As you may know, in the postwar years a metaphorical story was told of how nature rose up, in the form of a horrible giant reptile, Godzilla, and other awful sleeping monsters, and laid waste to Tokyo and other major Japanese cities. Thus, given their culture, history and present circumstances, it should be understandable to someone of your perception how the Japanese and Mr. Miyazaki, in particular, could justifiably believe that humanitys fate is linked to the natural environment, and perhaps also determined by it. Perhaps you are merely alluding to the fact that Miyazaki goes beyond the traditional romance and human conflict stories in his story telling. Beginning with the stories of the Tower of Babel and the Flood, where humanity, too big for its britches, is taken down a notch by the Creator, and in Greek tales of youth becoming fatally enamored with new technology, this theme of come-uppance is reflected in one mans deal with the devil told by Goethe and others, and in 18th century tales of doctors experimenting with chemical enhancements unthinkingly turning themselves into criminal brutes (Dr. Jekyll and Mr. Hyde; The Invisible Man), or a brilliant chemist striving to create life who ends up creating a monster that goes on a murderous rampage which includes its creators family (Frankenstein), and, in the late 20th century a story about government scientists creating a virus that destroys civilization (The Stand), and a series of movies about advances in computer and robotic development bringing about the singularity that destroys civilization (The Terminator). The deleterious impact of industrial production on our biological environment has been documented innumerable times since, including in The End of Nature by Bill McKibben. The movies of Hayao Miyazaki, as you have observed, are more than merely preoccupied with the environment. From your statement above, one can guess that you, a denizen of New York and Los Angeles, cities built on the extraction, manipulation and exploitation of the natural environment of the North American continent and well-being of divers of its erstwhile inhabitants, who likely frequents the popular restaurants, who has no doubt read many books, who probably tries to get to the beach in the summer time, and who undoubtedly has the utmost respect for the right kind of people, are not unduly preoccupied with the environment, and perhaps feel entertainment that depicts, and causes thoughts about, possible unpleasant future scenarios is inappropriate to our time, and perhaps even in bad taste.

There is the place where "Princess Mononoke" and "Nausicaa of the Valley of Wind" go in social structure very much. I like "trendy deer of the valleys of the wind" as a work, but evaluate it if "Princess Mononoke" is higher in the meaning of the completeness of the animation markedly. The world reproducing by death of God as expression of the stories to continue (there is not the = end) thinks that it is the beauty that is complete as one pattern. The person who feels it when I like "Princess Mononoke" because it is a very good work watches "the paprika" and wants to hear the impression from the Japan foreign territory.

However, if you're like me and DON'T own the film, this is an interesting way to experience Princess Mononoke.

You can never have too much Miyazaki in my opinion, but for those trying to choose between one or the other - go for the movie!

The success of the film led to the establishment of a new animation studio, Studio Ghibli, at which Miyazaki has since written, directed, and produced many other films with Takahata. His major work was the Nausicaä of the Valley of Wind manga, an epic tale he worked on intermittently from 1982 to 1994 while he was busy making animated films.