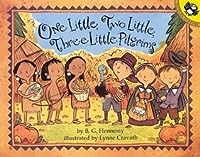 In colonial Plimoth, the Pilgrims hunt ducks and geese and dig up turnips and carrots.

Finally it's time for the meal.

First everyone gives thanks, then it's time to eat and celebrate.

I appreciate the attention to period detail and the sense of harmony between the pilgrims and Wampanoag (and that their real name is used not "Indians," thank heavens!) However, it just wasn't THAT memorable largely because it's really just a retelling of the "One Little, Two Little, Three Little..." song/rhyme we all know so there is no meat to the text.

I was like is she really using a bubble maker? It's like no research was done at all to produce this. Fishing for cod." Then showed the Pilgrim kids "Hunting for ducks, rabbits, and geese." The Wampanoags were "Planting crops of corn and beans. The Pilgrims were digging up food in the garden. I was surprised that she said this wasn't supposed to represent the first Thanksgiving, but the Pilgrims and Wampanoag life. I mean they gathered together for a feast...of Thanksgiving...Odd. I liked the historical facts from the author at the end. She researched and found a lot of material on their way of life, including clothes, table manners, dishes, utensils and dwellings of the Pilgrims. She learned about Wampanoag clothing, hairstyles, canoes, dwelling and hunting and fishing.

I hoped the whole book wasn't like that. I liked the page of the Wampanoag village, with their houses, the lobsters cooking over the fire, the canoe in the water. I also liked the wintry page with the pilgrims hunting. I liked the page with the Wampanoag carrying their baskets of corn and the pilgrims carrying their items and they're about to meet on the trail. On one page is the Indian's village and the other is the pilgrims, showing them connected by a path through the woods. Clams and oysters--tummies growling.' I liked that both the pilgrims and Wampanoag were used in the rhymes. It even had the boys digging for clams and fishing, like in This First Thanksgiving. I liked the authors note at the end. She said there was a surprising amount of information about everyday life then, and she looked up clothing, dishes, utensils, and houses of the pilgrims, and clothing, hairstyles, canoes, houses, fishing and hunting methods of the Wampanoag. There's a reference page at the end I'd love to look into it, because I love reading about daily life in historical times.

The additional information at the end of the book was a nice treat as well, designed to further inform and debunk the current mythology, such as the fact that the book does not address the Thanksgiving feast (despite clearly occurring during the fall, centering around a large meal between pilgrims and native americans, and featuring turkeys), but rather provides "a general picture of Pilgrim and Wampanoag life." The three-day feast we know as Thanksgiving, the book points out, was held in Plimouth in 1621 to celebrate the harvest.

One of the pages has the text, "Everyone has a job to do." This book focuses on the historical aspect of Thanksgiving in a way that children can understand.

Freely rendered, cheerful pictures belie the author's and illustrator's research into the daily lives of the Pilgrims and the Wampanoag (e.g., for a spread about planting crops, Cravath shows a Wampanoag boy planting a fish; the informative endnotes include the explanation that the fish served as a type of compost).

I like how the song includes "digging for clams. Planting crops of corn and beans. Now it's time to celebrate!" The song ends with counting turkeys (ten of them) for the feast.

The cute picnic scene at the end depicting all the settlers and Wampanoag; men women and children sitting together outside for the Thanksgiving feast would surely open up discussion.

At the University of Wisconsin in Madison, I majored in fine art and learned how to design, print and bind handmade books. The combination of form and content in the picture book format fascinated me and after graduation I headed for NYC where I worked for 17 years in childrens book publishing as a designer and art director.