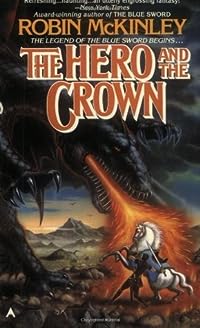 The Hero and the Crown

Aerin could not remember a time when she had not known the story; she had grown up knowing it.It was the story of her mother, the witchwoman who enspelled the king into marrying her, to get an heir that would rule Damar; and it was told that she turned her face to the wall and died of despair when she found she had borne a daughter instead of a son.Aerin was that daughter.But there was more of the story yet to be told; Aerin's destiny was greater than even she had dreamed--for she was to be the true hero who would wield the power of the Blue Sword...

Read the Book "The Hero and the Crown" Online

the stirring, highly enjoyable novel The Hero and the Crown rejects post-feminism.

I love how she identified with her father's injured war horse during this and helped him recover too. (Talat was a pretty cool horse too.) She also took on a job that was far from glamorous because she knew she could do it better than anyone else, and she worked hard to get to that point. I'll start where I left off, when Aerin gets home from her battle with the big dragon. She was nearly dead after the battle, but she managed get home, and then she recovered to the point where she could walk around without assistance, and her hair all grew back and she didn't even have any noticeable scars... And even after Luthe dunked her in his magic pond to cure her of the dragon's taint (or whatever) she was mopey. He constantly bashes her country and her family, especially Tor, who was always kind to her and loved her. If you walked up to someone in Middle Earth and asked if they'd heard of Sauron, they'd say the Middle Earth equivalent of "well duh, who hasn't?" and look at you like you were some kind of idiot. How the heck does Whatshisbucket manage to be the ultimate bad guy anonymously? The hero accidently kills the anonymous ultimate bad guy with a magic rock they just happened to pick up because it was pretty. Then Luthe shows up and informs her that she's actually taken a few hundred years to battle Whatshisbucket and he's come to take her back to her own time so she can end the war that's raging in her kingdom... The way he was constantly dissing her family and homeland and the nice guy back home who had always treated her like the princess she was? Or maybe it was the way he sent her off to battle a super powerful bad guy and then showed up after the battle was over to walk her home? So she goes home and uses a magic crown (which was lost for centuries) that she got from Whatshisbucket to help win the war.

One suspected witch was the dead second wife of King Arlbeth, who gave up on life after being delivered of a daughter, Aerin. Aerin took a dare from a mean female cousin to consume a plant that would supposedly kill anyone but a member of the royal family, and this made her sick for months. Once she recovers, Aerin spends most of her time training, and bonding with, an old lamed war horse named Talat, who becomes her loyal steed when she finally tests out the dragon-proof balm against a minor worm in a small village. Word of their first victory spreads, in spite of dragon-slaying not being a proper occupation for a princess, and soon every village wants Aerin to deal with their scaly pests. Only Aerin is left to deal with himbut he proves almost beyond her nascent skilland she only kills the Worm at great cost to herself. This plot development is even weirder because she (view spoiler)immediately marries Tor upon getting back to civilization, and the implication is that, since Aerin can no longer age, when Tor dies she will climb Luthes mountain and become his wife.

Actually I loved the first half of this book, with the story of the princess Aerin who has never felt like she fit in with the royal court. Luthe, our mysterious man, is never really given much character or color, other than being a bit of a creeper, and then suddenly he becomes the romantic interest, and it's meant to be tragic that he and Aerin can't be together yet. The second half says less and less about Aerin's mind and character as well, until at the end I can't figure out why she does anything she does and why I should care.

All the other fantasy I was reading featured boys tramping across pseudo-English countryside before being crowned as kings--and instead, here was an awkward, stubborn, hard-working girl who wanted to be able to value herself and prove her worth. And then she goes out into the world to kill dragons. Reading it now, after an extra decade of socializing and reading other fantasy books, Aerin and her lifelong quest to be a good and useful person is still wonderful, but less of a revelation.

The Hero and the Crown is a sort of distant prequel to Robin McKinley's Newberry Honor winner The Blue Sword. Even more, unlike all members of the royal family, Aerin possesses no special magic powers. I couldn't help myself thinking that McKinley has much more story left to tell about this country. What I do not appreciate about this book, and maybe it's just a personal pet peeve of mine, is the romantic story line. Nevertheless, The Hero and the Crown is a worthy contribution to YA fantasy literature and is one of a few books that portray strong heroines whose lives are not directed and defined by their hot brooding boyfriends but motivated by love for their country and loyalty to their people.

At the time, 'The Blue Sword' (to which this is a prequel) was one of my most-beloved books - and, I have to admit, that at the time, I didn't feel the 'The Hero and the Crown' quite measured up. In 'The Blue Sword,' Aerin is a legend of history, a dragon slayer and wielder of a sword of magical powers. Aerin's doggedness and use of the scientific method in figuring out how to eliminate them more efficiently is a rare and appreciated example of the value of methodical persistence in order to accomplish anything. Aerin grows and matures, but at the same time begins to feel a little bit more elevated and less accessible to the reader.