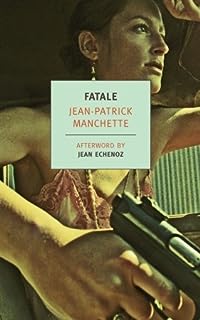 A New York Review Books OriginalWhether you call her a coldhearted grifter or the soul of modern capitalism, theres no question that Aimée is a killer and a more than professional one.

Aimée has become the avenging angel of her own nihilism, exacting the destruction of a whole society of destroyers.

An unholy original, Jean-Patrick Manchette transformed the modern detective novel into a weapon of gleeful satire and anarchic fun.

Read French author Jean-Patrick Manchettes ninety-page coolest of the cool noir novel Fatale to have a sense of what it would really be like to take control of your life. And speaking of knives, here is the slim, athletic, fetching thirty-year-old main character Aimée Joubert on the topic of killing, reflecting back on how she plunged a knife into the liver of her first victim -- her abusive husband, It was a genuine revelation, you see, said Aimée to the baron. But Aimée's response to these odious bastions of mediocrity is entirely opposite to Des Esseintes rather than retreating in isolation, she infiltrates their social circles; rather than becoming progressively weaker, she uses martial arts and exercise equipment to become progressively stronger; instead of reading Baudelaires poetry, she reads crime novels (I imagine her reading Jean-Patrick Manchette crime novels!); and, most dramatically, instead of wishing her enemies dead, she shoots them dead. In this respect, Fatale is only one notch removed from cinema, cinema as in Pulp Fiction or Kill Bill, that is. Even relaxing in her bathroom, Aimée primes herself for action: Lying in her hot bath, she opened the crime novel she has bought. Since this is such a jazzy-cool novel, one last action from our sweet Aimée, this from the opening chapter, where she walks up to a fat pharmacist who is out hunting with his fat bourgeois buddies and has sauntered off by himself to take a rest under a tree. Jean-Patrick Manchette (1942-1995) - French novelist of hyper-cool crime fiction with political overtones

It was a genuine revelation, you see, said Aimée to the baron.They can be killed. Aimée meets the Baron Jules, his male member in his hand gleefully pissing on the hallway wall of one of the more affluent members of this society. It doesnt surprise me that, out of all the people Aimée has met in this town, the Baron is the one she appreciates the most. Society perceives them to be successful men, certainly not criminals, but to Aimée that is exactly who they are. It is interesting reading this book against the backdrop of the recent flurry of accusations flying fast and furious against actors, politicians, and reporters for misusing their positions to force themselves on women/men who were under their power. It is a good thing for men everywhere that Aimée is a fictional character or she might bring her show on the road to Washington D.C. or Hollywood or to your hometown. The other interesting thing is the creativity that Aimée uses to kill. It made me think about all the weapons I have ready to hand right at my desk as I write this review. Potential weapons are everywhere around us and Aimée takes full advantage of their availability. Interesting enough Aimée changes brand of cigarettes frequently in this book almost as a deflection from people knowing anything about her with any certainty.

The story has none of the intricate plotting or combustible sex of modern film noir like Body Heat or The Last Seduction. THE BEACHFRONT WALKWAY - NIGHT The Woman, MATTY, has walked to the rail. RACINE: You can stand here with me if you want, but you'll have to agree not to talk about the heat. MATTY: I'm a married woman. MATTY: Meaning I'm not looking for company. RACINE: Then you should have said -- 'I'm a happily married woman.' MATTY: That's my business. Racine shakes his head "no." MATTY: I like that in a man. RACINE: What else you like -- Ugly? MATTY: You don't look lazy.

A beautiful stranger going by the name of Aimee Joubert comes to the town of Bleville, a fictional fishing/industrial/tourist place by the Atlantic Ocean. Bleville, according to the introduction to the novel, can be translated as "Dough Town", a prosperous, thriving place, at least on the surface. For the cynical Aimee it is a den of thieves, like all the other places she has visited lately, in her personal crusade against society's ills. We get an inkling of her quest in the opening scenes of the novel, describing a hunting "accident" in another part of France, for which the girl was apparently well paid. Aimee is not above using her physical charms to make her way in society, but her motivations transcend the personal and veer into the political and the universal questions of modern existentialist angst. Even though, the final scenes aim for the metaphorical rather than for the usual unmasking of the criminal elements and their motivations, hinting at the alienation of the individual and at the widespread corruption of the modern world. Whichever way you go, there is a big hill to climb before you get out of Bleville Aimee climbs into the sunset (view spoiler) fatally wounded, wearing a bloodied white dress (hide spoiler)

Much as I love it when bad things happen to rich people, I can only give this one three stars, and here's why . He's also longing to take down the rich and powerful. I wish that Aimee had gotten more of a thrill out of messing with the townsfolk, much like a cat playing with its prey, but she was really doing it only for the the money.

In my opinion, it cannot match up to 'Black Wings' or any of the American noir novels, but it has definitely an appealing charm in its own absurd way.

Or it does apply, but that would make you, the reader of this review and possible future consumer of this book know if this book is for you. Give it a whirl, you'll waste less time than you will if you watch a "Real Housewives" marathon (I've never watched an episode of any of those shows, but I imagine it relates in some way to this book, I could see the protagonist moving into the vapid lives of those women (I'm assuming vapidity, and in Vegas I'd bet heavily that the shows are vapid even though I haven't watched them) and figure out a way to rob them and possibly kill a husband or two) so you should just go for it. It didn't radically change my world or anything, and it wasn't my favorite crime novel ever, or my favorite French novel, but it was a solid good reading experience.

perhaps i like short work purely in an instrumental way: something i can read, enjoy, read again, all in one afternoon at the coffeehouse. maybe i like french takes on crime so why am i delaying you from reading this work?

WAIT, CRIED THE BARON This book was among a stack of short novels I keep for travel and speed-reads. -- it is French and that is probably why it got the classic noir misnomer. Is something wrong?" "I have just killed Baron Jules with a sporting gun," said Aimee. I am a terrifyingly negative and beautiful person, but -- LISTEN UP! -- I really have to say I did not like this book.

He wrote ten short novels in the seventies and early eighties, and is widely recognized as the foremost French crime fiction author of the 1970s - 1980s . His books are reminiscent of the nouvelle vague crime films of Jean-Pierre Melville, employing a similarly cool, existential style on a typically American genre (film noir for Melville and pulp novels for Manchette). In 2009, Fantagraphics Books released an English-language version of French cartoonist Jacques Tardi's adaptation of Le petit bleu, under the new English title 'West Coast Blues.' Fantagraphics released a second Tardi adaptation, of "La Position du tireur couché" (under the title "Like a Sniper Lining Up His Shot" ) in the summer of 2011, and has scheduled a third one, of "Ô Dingos!