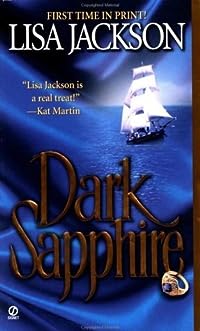 With no one to turn to for help, she went aboard the Dark Sapphire as a stowaway, seeking deliverance from the hell that pursued her ...THE CAPTAIN Captain Keegan had no need for the love of a woman, not since watching his father lose everything --- including his very life --- over love's folly.

Wary of his father's mistakes, Keegan vowed never to allow his heart's passion to outweigh his mind's cold calculations ...THE CRAVING Discovered by the ship's crew and brought before Captain Keegan, Sheena knew she was done for.

But she had met this dark captain before --- in another time and place --- and now she sees the shadowy sapphire than ties them together reflecting in his deep blue eyes.

This book had an interesting enough story line, but I found that the way it was delivered was lacking.

Idk if its historically accurate or not, but it didnt sound like it, and if it was it was too idiotic to use in a novel. No one wants to read people talking like this. It was just unforgivable, but I guess to make it okay the author had Keegan completely forget Sheena and the curse she cast on him, and everything that happened when he was 14. I hate when authors have the 2 main characters meet at a young age and then fast forward a ridiculously long amount of time, after hed been with women, totally forsaking his alleged deep feelings for the main woman, and she hasnt been with a single man. Sheena thought literally 3 or 4 times that Keegan was the boy from her past. And Keegan kept questioning her identity too, thinking he knew her but not remembering where, and the vaguely remembered feelings of love. And his inability to remember her until the right moment was annoying too; the author dragged it out in her forceful and controlled manner, like everything else in the book. The characters also kept talking out loud to themselves, when it just didnt make sense to do so. Sheena would say things out loud that didnt need to be said out loud, and didnt make sense to, like tis time to face him, and god help me in random places. Authors sometimes have the bad guy speak stupidly, or some other character, to have the bridge in class and station, and that difference between the main characters and them, but in here every single person spoke the same way, which was unrealistic because they were all from different classes in life, and was just annoying because I was always surrounded by stupidity and didnt have one finely speaking person in the entire novel. Sheena was the first, followed by Keegan. They were always saying something stupid, and it just made the book hard to read and them hard to like. The love was completely forced the entire time. I didnt like Sheena, or her name, which seemed really modern for the middle ages. I felt sorry for the way Rourke, Keegans father, and Keegan himself treated Hollis, the old man, but he was annoying so I was just irritated by him. Sheena weakly attempts to offer herself to Sir Manning and let Keegan and his men go free, not trying hard enough in my opinion, saying nay, take me and let them go. In fact, everyone said nay all the time; they all sounded like horses. She finally, finally, goes with Manning, but then I have to suffer through Keegan and the soldiers, tricking them into thinking hes going along with them, and Sheena and her fathers declining health. Its like the author was copying pirate books shed read that had the rich lady fall in love with the captain and his band of thieves, except in here Sheena didnt have time to do that, and didnt have the opportunity. She stayed in his cabin 98% of the time, and only spoke to Bo about Keegans dead wife. The thing I was most mad about, besides the love that came out of nowhere, and besides the awful atrocity of a love story, was that Sheena spent the entire book being believed to be a witch. I watched as the entire book ended and not one word was said regarding Sheenas alleged powers. I was thinking in the beginning it was going to have supernatural abilities in the book, and when nothing of the sort ever happened, I waited for Sheena to admit it was a lie. Almost like the author didnt know what the heck she was doing, or didnt think the plot tool she was using the entire novel deserved an explanation. Ive read several by her now and Im done reading her books because theyre boring beyond measure, the writing is awful and the characters and plot are annoying and pretty much go nowhere.

Keegan was a young lad when he saw his father Captain Rourke killed by Jestin of Ogof over a game of dice. He kissed her and took off rowing to his fathers ship.

Lisa Jackson is the number-one New York Times bestselling author of more than 85 novels, including Afraid to Die, Tell Me, You Dont Want to Know, Running Scared, Without Mercy, Malice, and Shiver.