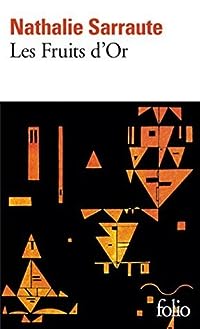 But what happens when something becomes too popular for these, in Sarraute's words, "exhumers of dust?" Woe be the author whose intelli-tide has turned against him.

Robbe-Grillet -it felt to me- believed he had a mission to compile and push forward the efforts and works of the Nouveaux Romanciers into a school (ironically, a very structuralist endeavor from someone like him) that should have its legitimate place in Literature and Cinema. I dont think the other Romanciers (Sarraute, Simon, Butor, Pinget) saw the Nouveau Roman as he did; at least Sarraute didnt but it seemed they all agreed to step out of the dualist form/content of literature, to get rid of perspectives, therefore of characters, to neutralize psychology and to pay a closer attention to the relationship of time/space and to explore non-linear action (if one could label what happens in these books as action) I anticipated that I would start Les Fruits dOr once I would be done with those clips, and therefore, I classify the above as my planned literary fortification against what Nathalie Sarraute might throw at me. Liberated from God, independent of a linear progression of time, yet facing the certainty of a linear progression of time, and therefore age, the modern artist revels in the absurdity of the minutiae and dresses juxtaposition in a some comical robe: Kafka, Bunuel, Robbe-Grillet, Sarraute It is through the gate of modern humor that I decided to tackle Les Fruits dOr. The first half of it is immensely funny. This scenario which could have ended in the first two pages, is repeated in various shapes and forms many times, sometimes recounted in its entirety, at others, fragments of it are thrown in paragraphs where the fictitious Les Fruits dOr is being defended or ridiculed. Of course Sarraute could not have been referring to that, because the book came decades before that episode, but it clearly demonstrates the attacks Les Nouveaux Romanciers were enduring from critics who, apparently (and as Robbe-Grillet fiercely declares it in that show, They have not even read Joyce or Kafka or Faulkner) had no idea of what those writers were writing, and who refused to admit of writers who did not maintain the Balzacienne vein. Within the frame of this affected elegy and praise, there comes a simple-minded reader who challenges the eminent critics and their backup choruses to demonstrate to this ignorant -book in hand- where the genius lies of the fictitious Les Fruits dOr lies. Sarraute -if I shouldnt assume that she is intelligent shows her support to Le Nouveau Roman even if without adhering to it through the posing of a very literary question towards the end of the book when the woman asks: Le sujet quelle importance? it's only a pretext This has always been the position of the Nouveaux Romanciers regarding content and subject, and they take this from Flaubert who considered that Madame Bovary without the writing, without the form, would not be Madame Bovary, or it would be anybodys Madame Bovary. (The films of Robbe-Grillet and Bunuel, thought not an adherent of the Nouveau Roman, reflect this subordination of content to style) I waited no less than 5 years to read this book -I think I added it to my Currently Reading list on Goodreads ever since I opened the account- and now I rank it among my favorite books of all time.

Formally adventurous, perceptive, and still relevant, Sarraute's "Golden Fruits" should resonate for anyone who loves books and is curious about the many mechanisms that play a role in establishing literary reputation.

Nathalie Sarraute (July 18, 1900 in Ivanovo, Russia October 19, 1999 in Paris, France) was a lawyer and a French writer of Russian-Jewish origin. Sarraute studied law and literature at the prestigious Sorbonne, having a particular fondness for 20th century literature and the works of Marcel Proust and Virginia Woolf, who greatly affected her conception of the novel, then later studied history at Oxford and sociology in Berlin, before passing the French bar exam (1926-1941) and becoming a lawyer.