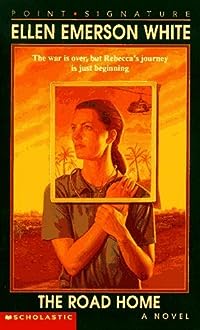 But there were no answers for her in Vietnam--only more questions.When Rebecca returns to the U.S., her war still isn't over.

To piece her life back together, Rebecca travels across the country in search of hope, of forgiveness...of the road home.

This is one of my all-time top comfort reads. Minutely researched Vietnam War novel=comfort read? White's prose and dialogue are as rapid-fire as ever and my pulse races every time I read it.

I hardly ever cry over a book but this one had such an emotional impact I couldn't help but feel every moment of heartbreak, turmoil and even happiness in Rebecca's story. If that weren't enough to mess with someone's head, after impulsively jumping in a helicopter (which she should never have gotten on in the first place) and being shot down over the jungle, Rebecca spends several days MIA in the jungle fleeing for her life until she stumbles upon a squad of American soldiers. Among the soldiers is Michael, a surly grunt, whose letters become a lifeline to Rebecca after her return to the hospital. Michael is so real to me - his fears and glimpses of hopes are all contained in his letters and just like Rebecca couldn't wait to read his latest. It turns out White felt like she had to finish Rebecca's story (which begins in these books) and thus wrote The Road Home as a sort of conclusion.

And the question is no longer whether Rebecca will figure out how to sign her own letters or if she will survive Vietnam without being entirely destroyed. So I am now going back to re-label all my four-star ratings for the books in this series as five stars. I first read this book in 1995. Even if I had read The Road Home recently, however, there is no doubt that this was an entirely different experience. Because while Scholastic clearly marketed this book as a stand-alone, it is genuinely the end of the series. Can you read this book alone and enjoy it? Because I can now say that this is one of the most satisfying series I have read in a long time.

Given how until the very end of Stand Down the series has focused on the fighting, this seems like a strange choice, but it becomes immediately clear that the author intends to show that war is just as devastating for the ones patching up those wounded and dying kids as it is for their patients. Rebecca, who still hasn't told anyone what really happened in the jungle on Christmas Day, has friends, but not close ones; she's developing an unexpected relationship with Major Doyle, chief of the nurses; and she has her correspondence with Michael to hang onto. And what comes next is both terrible and completely expected: the major is the one who tells Rebecca that Michael is there, that his leg has been amputated, and even though I knew Echo Company couldn't escape this unscathed, White did a clever and nasty thing by killing off a couple of the men before this. Her relationship with the major continues to develop, and I think I like their prickly friendship better than any of the other ones (except, of course, Michael). White glosses over the time between the major's leaving and Rebecca's final days in Vietnam, which works really well because what matters now is her being back in the World. Throughout the series, that's how the soldiers and the nurses refer to home--Vietnam is its own place that is so alien it's almost not real, and I think for many of the grunts that accounts for how they behave there. He puts up a good front, but he's a gentle soul, and I wanted to weep for him when he tells Rebecca what little he's able to say about those days, including that Michael and Sergeant Hanson would have stopped them) but it's easy to imagine men feeling so detached that they could begin to think that the rules were different in the war. At any rate, Rebecca's return to the World begins on the airplane, where a man puts up a fuss about having to sit next to a veteran, and I think for any young reader, raised in a time where even people who despise our wars can talk about respecting the soldiers who fight them, this is going to be a nasty surprise. Ending the story not in Vietnam, but in the United States, makes those horrors even more real by showing how they follow Rebecca and Michael home.

I first read The Road Home right after reading The Grapes of Wrath, and both books illuminated their time periods in the same way for me. There's a book I don't like very much that I'm about to quote, because there are times that Austen is so precise that she is transcendent: "If I loved you less, I might be able to talk about it more." One day I may be able to review this properly.

Long time coming, particularly since I haven't read it in six years, but this is probably one of my most favorite books in the world. Needless to say, this was one of the first books I read that had swearing (view spoiler)not sex though--that was The Horse Whisperer in fourth grade--although I had no fucking clue what sex was back then.

But when Michael is admitted to the hospital seriously injured and her year of in-country service is up, Rebecca's practically forced to leave, and home isn't a place she can hide from her guilt-ridden, damaged soul much longer. Reading about war through the perspective of a nurse rather than a soldier was very refreshing, but just as horrific and painful. This is so simple, but I liked how she interspersed letters with at times line-by-line thoughts and commentary from the character reading the letter. I particularly liked how smoothly Rebecca's words and thoughts ran together - what she was saying and what she was actually feeling in the same moment was so important to the story. I will definitely be reading any of the other Rebecca books I can manage to get my hands on.

:) The Road Home has two sections: the first part deals with Rebecca working as a nurse in Vietnam and the second part is about her coming back home to the States. I thought The Road Home was a standalone novel but looking at Ellen Emerson White's website, it looks like she wrote a series called The Echo Company which focuses on a certain soldier's experiences in Vietnam and Rebecca comes into the picture in the latter books. This is probably why when I was reading The Road Home, I felt like I came into the middle of the series. As the story starts, Rebecca is working in an American hospital in Vietnam. The Road Home is more than just Rebecca's story of coming back from Vietnam.

In addition to novels, Ms. White has published several biographies.