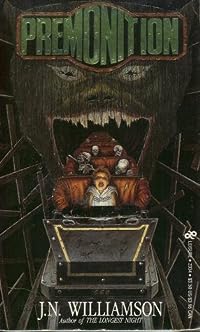 Quite often the cover artwork had nothing at all to do with the book, or depicted scenes that never took place, but the point was to get you interested enough to give it a look, and in this case, I think the artist did a fine job. What's more frustrating is the back of the book copy takes great pains to point out the location as an abandoned amusement park, once noted for "a horror house that boasted '1,000 Chills and Thrills!'". It's not a story about rides coming to life or strange creatures stalking the Funhouse or anything like that. I covered Martin's background in my review of The Ritual, but the basics you need to know are that Ruben's kind of a dead ringer for Basil Rathbone's portrayal of Sherlock Holmes, he teaches Psychology at the fictional Badler University in Indianapolis, and takes on side gigs as a practicing parapsychologist. Given the events of The Ritual though, we're led to believe that story is the first time Ruben's actually encountered obvious, direct evidence of the paranormal when, if he'd already experienced the events depicted in Premonition, this notion is absurd. The catalyst for dear old Martin's roller coaster ride to Hell in this one is a beautiful blonde woman named Ingrid Solomon. Lake Triton, Nommos Island, and Boysandgurls, much like Badler University where Martin teaches, don't actually exist in real life, but Williamson is using real locations to fill in for them and playing a little fast and loose with the geography to suit the needs of his story. There are several amusement parks in Indiana which had gone defunct when Williamson was writing Premonition, but the only one situated on an actual island was Rose Island, abandoned in 1937 after the Ohio River flooded the area to a depth of ten feet. Williamson's clearly getting a handle on the more adult aspects of writing horror too--while The Ritual contained a few scenes that would guarantee an 18+ certification had they been filmed, Premonition absolutely blows it out of the water for sheer luridness: tons of sex, tons of violence, and especially at the end, tons of gore are squished into this book's 287 pages. That said, while I liked the concept of the book and as a horror fan I'm not upset by either an overabundance of sex or violence in my paperback reads, I still don't feel like Premonition was all it could have been. Like, there are still some major unanswered questions facing the protagonist after Williamson's concluded the story, including just how the hell he's going to get off the island, not to mention how he's supposed to go back to his formerly ordinary life after experiencing everything he's seen and done on Nommos. I've never encountered one of these in any other horror story, and it's nice to see something other than the same old vampires and werewolves raising hell with the characters. Maybe Williamson will explain himself in the third Martin Ruben book, Brotherkind, but given how completely this book stands alone from The Ritual, I tend to doubt it. It's nice to see Williamson cutting loose with the violence and sex, even though like most authors who don't write erotica for a living, his sexy bits feel about as awkward as some backseat fumbling of one's own. Abandoned amusement park, man...come on, that's got 'horror story' written all over it, and it's hardly mentioned. The questions cover virtually everything you could imagine in Ingrid's effort to ensure astrological compatibility among her staff: obvious stuff like date and time of birth along with one's astrological sign open the questionnaire, but it isn't long before the form's delving into Martin's most personal habits, fears, and fantasies. The resulting orgy is more than enough to satisfy our protagonist, but it's never made clear if the women were sent because Ingrid believed what Martin put on the form, or because she wanted to teach him a lesson about taking everything on Nommos Island seriously.

There is a mound of dirt that everyone goes to everyday. We teeter on turning this thing into a non-fiction book. The mound turns out to be a succubus. This had a few good things going for it.

I've enjoyed J.N. Williamson books for a long time and was excited to find this one at the local Bookfest this year. I just didn't want to waste any more time on a book I wasn't sure would deliver in the end.