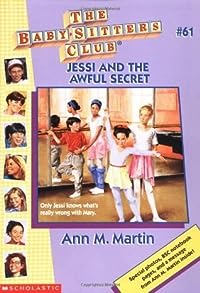 Jessi and the Awful Secret

Jessi discovers that one of the girls in her dance class is anorexic. A sensitive look at a common problem among teenage girls.

Read the Book "Jessi and the Awful Secret" Online

in this afterschool special on top of afterschool special book by ghostwriter Suzanne Weyn jessi starts volunteering for a free ballet class for "underprivileged" kids. in the class she notices that one of the other volunteers/one of the girls in her regular ballet class is not eating much, is losing weight, and keeps getting sick/fainting. anorexia, race & other minority statuses, and what "underprivileged" means are all addressed in kind of idiotic ways. martha is a black girl in jessi's "underprivileged" ballet class who has natural talent. it turns out that she had sent martha to dance classes before but stopped when her neighbor told her she was wasting her money because there is "no room for people of color" in ballet. -watson brewer ends up sponsoring two scholarships to the ballet school, given to martha (see above) and devon, a boy who is really hyper and silly but ends up getting serious about dance. -raul (one of the volunteers) thinks that mme dupre (the ballet teacher) doesn't take the free classes seriously because the kids are charity cases. I mean, I know what you're saying, but that hasn't been my experience." SERIOUSLY? -jessi suggests mary (the anorexic girl) order a salad at burger king and she says that salad dressing is too fatty so she gets fries instead. -why do they keep calling yvonne (one of the free ballet class kids) plump in a book about anorexia?

at the end of class, mme noelle tells everyone that the ballet school is going to be hosting a children's beginning ballet class for local under-privileged youth, & she asks for volunteers that might want to work with the kids. jessi volunteers right away & is surprised that more of her classmates are not chomping at the bit to spend their regularly scheduled dance class time (for which they pay out the nose) teaching strange children ballet skills for free. but one other girl in the class, mary, does volunteer. one of the boy volunteers, a latino dude named ramon, remarks that the class teacher, mme dupre, doesn't really seem to be pushing the kids to do any real ballet. i imagine him jumping up on the table & being all, "mme dupre doesn't care about black people!" he asks jessi to back him up, but she demurs & says that she doesn't feel she has ever faced prejudice in her ballet classes. jessi notices that mary is a little thinner during every ballet class, & she starts wearing baggy clothes to hide her body. the naturally talented kids that jessi noticed on her first day of volunteering with the kids' class continue to be good dancers, & the high-spirited little boy dedicates himself to learing the steps after mme dupre benches him one day for distracting the other students. they all agree that mary may be on the road to anorexia, & that jessi should say something to her &/or mme noelle. jessi also realizes that the under-privileged kids she's teaching won't be able to afford to continue taking ballet classes after the free starter class is over. there's all this narration on jessi's part about how mme noelle probably has no idea what's going on with mary. but there was already an A-plot (mary's anorexia) & a B-plot themed around kids (the volunteer class), so the kristy/shannon stuff seemed like a distraction.

Jessi helps teach a special dance class for children, and discovers that one of her fellow dance helpers may be anorexic. In the meantime the older girls in the BSC get to know Shannon Kilbourne, to Kristy's annoyance. Things I remember from reading this as a kid: I read this when I was ten or eleven, and I remember how Jessi agonized over what to do about Mary, the girl she thinks has an eating disorder. I loved reading about Jessi helping out in the dance class for kids. Things I've considered since reading this as an adult: This book talks a lot about the "underprivileged" people that the special dance class is serving. This pity feels super awkward, especially coming from Jessi, who is so often pitied by her best friends for having such a hard time dealing with racism in Stoneybrook. Raul is angry when he feels that Madam Dupre isn't teaching what he considers a real ballet class. He assumes this is because she thinks inner city kids, some of whom are children of color, aren't worth teaching a real ballet class to. I guess since Jessi's family has a lot of money racism isn't so bad. But I liked that the book mentions Raul's point of view, even though the white kids and Jessi don't agree with him. The book also slips into "let's teach a lesson mode" when it has Jessi talk about the Alvin Ailey American Dance Theater, and how hopeful the future looks for dancers of color. For a woman who struggled as a single parent with four children for years, Kristy's mother has taken to the role of society wife very well. It seems odd that in this book only Shannon, who is usually so busy she can't be full time member of the BSC, suddenly has lots of free time on her hands and expects to hang out with Kristy. What with Jessi becoming friends with her dance school classmates, and the older BSC girls spending too much time with a mere associate member, Kristy, the cult leader of the BSC, is just not having a good month.

I don't know, but looking back, probably.

Jessi is happy to get to know ballet classmate Mary Bramstedt better when they work together as TAs on a short-term ballet class for underprivileged elementary school kids. Jessi laments the problem to Kristy, who gets Watson to save the day by offering two ballet scholarships through his foundation or whatever. Do they plan to offer the scholarship to new kids next year? Is Watson really making, like, a ten-year commitment for two new kids a year for the rest of time? There are some charming dynamics with Jessi feeling grown-up because shes the youngest TA, and part of what makes her holier-than-thouing so obnoxious to irritable Mary is her youth, but that could be preserved if the other kids are mostly seniors.