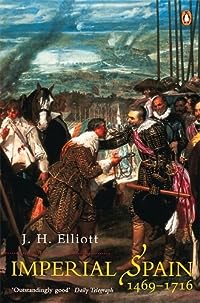 This amazing success however created many powerful enemies and Elliott's famous book charts the dramatic fall of Habsburg Spain with the same elan as it charts the rise.

The book runs from the marriage of Ferdinand and Isabella down to the death of the dynasty with Charles II, "the last stunted sprig of a degenerate line" as Elliot describes him on account of the Spanish Hapsburg's bad habit of marrying uncles to nieces or first cousins, or sometimes both at the same time because the genealogy got complicated. Prices rises might well have been more effected by the export of Spanish goods, particularly foodstuffs than the inflow of silver in Elliot's account.

The book ably navigates that forbidding passage between simplifying popular accounts and unreadable scholarly monographs, managing to be both a work of serious intellectual synthesis and an absorbing account of Spains history. Although the story of Spain during this time was heavily interwoven with both the New World and the rest of Europe, Elliotts focus doesnt stray from the Iberian Peninsula. For those looking for a history of Spanish colonization, this book will therefore be disappointing. Keeping those exceptions in mind, this book is a superlative account of this period of Spanish history.

The history begins with the first steps toward unification (sort of) of the two kingdoms of Aragon and Castille with the marriage of the two heirs (sort of) to the respective thrones, Ferdinand and Isabella. Jealousies between the regions and their varied economies and histories plagued the attempts of successive rulers during war and peace, good times and bad. Elliot does a very good job of laying out the history and analyzing it for his stated goals and I am basically satisfied with my reading. There remain some questions for me on my stated goal of reading the book but, in general, it is a good, well-written, academic history.

Hugh Thomas' histories of High Imperial Spain seemed to have the most noise online about them, so I grabbed one and started reading.. The only other general survey that seems to exist in English AND in e-book format is this one, J.H. Elliott's "Imperial Spain". I tend to lean towards very recent history as there has been a lot of new source material and re-examination going on in a lot of historical fields, particularly since the fall of the USSR and, as regards Spain, the post-Franco era. Overall, I found this an EXCELLENT history, particularly for the reader who has a good understanding of the general flow of European, Colonial and Spanish history to begin with. Overall, though, particularly given the paucity of books covering this topic, I can whole-heartedly recommend this volume for anyone looking for a general history of Imperial Spain.

Having begun the period covered by this book as the most multicultural nation in Europe, Spain ended as an inward looking, highly parochial society - shackles that were not be thrown off for another three centuries and the departure of Franco.

It touches on political structure, economic tendencies, and religious currents, and pays special attention to the push-pull tension between uniting Spain (and other Hapsburg dominions) into a unified whole and preserving the rights and customs of each region.

I am sure that more recent research would have led J H Elliott to modify some of the detail, but that the basic story would be largely unchanged - of a Spain which had ambitions beyond its resources, which proved unable to tackle its constitutional problems and bring together the different regions of the country, of intellectual and commercial stagnation, of a lack of the vision to change in the way needed for a changing Europe, of agricultural collapse, of a social fossilisation which prevented the emergence of an economically energetic middle class, of a Roman Catholic Church which was frequently stifling in its influence and which fostered an intolerant bigotry that badly damaged the country. One major theme running through the book is the problematic relationship between a self-important Castile and the other regions of Spain, including Catalonia.

It serves as a good introduction to Spanish history; you don't have to know a lot about Spain beforehand. If you are looking for a catalyst to get started learning about the history of Spain then this book is for you. I had no interests in Monarchs before reading this book, but now I want to learn more about European royalty.

Was really impressed how easy the book was to read, although it wasn't too scholarly.