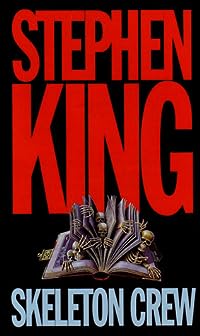 In this brilliant collection of stories, Stephen King takes readers down paths that only he could imagine.

A trip to the attic becomes a journey to hell.

A woman driver finds a scary shortcut to paradise.

There will be some of you that think three stars is kinda harsh for this collection. It does not mean you will not understand the Milkman stories or appreciate King's cute-ass poem about anthropomorphized fruit that he wrote for his youngest son Owen. The Jaunt - Five stars for this tale that takes cues from The Langoliers. The Reaper's Image - This three-star story seems like the inspiration for that horrible Oculus movie. For Owen - If I were King's kid I would expect something better than this two-star cutesy crap from my old man. Big Wheels: A Tale of the Laundry Game (Milkman #2) - If someone would like to explain this story and its predecessor to me, I might give it more than one star. The Reach - Stephen King says he wants to be remembered for this four-star beauty of a story, but he's done much better, at least in my opinion he has.

Audiobook was definitely a good route because it would have taken me FOREVER to slog through the stories I didnt like.

What a great name for this book of short stories. I thought Id just highlight a few of my favorites: The Mist - Its by far the longest short story in the collection. A crowd of people end up in turmoil together against that stuff, and at first theres only a feeling that something terrible is hidden in the mist. This scary good story may be the reason I never owned one myself. The Raft - The title alone sets your mind to wondering. And what could be the most terrifying part of this story, is that fact that I felt like the fifth person on that raft, just trying to figure a way to shore. The shock value counts for a lot here, and I wonder, Would I like the story even more with a character I cared for, or less? Its the Crews second longest story. King includes a nice afterward, at least in the 1985 HC edition, in what he calls such things that might interest the casual reader.

The horror stories I loved as a 12-year-old were each better than I remember. This novella of apocalyptic doom and ravenous monsters at the threshold may be the most terrifying thing I've ever read. King's creativity bloomed for me this time around, as did his unabashed romance for Ophelia Todd, one of the more compelling characters in what usually amounts to a rogue's gallery for him. Spellbinding science fiction tale that documents the invention of teleportation (in 1987!) and how a family preparing for a jaunt to Mars hundreds of years later comes out the other end with a valuable lesson about space-time travel. Another one of King's most primal and terrifying tales. Not terribly suspenseful, more of a gross-out story, but the lengths King goes to describe how a rogue doctor ended up marooned with surgical equipment and heroin is imaginative as hell. I now remember why after The Raft, why Skeleton Crew becomes something of a chore to power through and finish.

Dylan Baker reading the milkman stories was FANTASTIC!! I think everyone should pick this book up if only to read The Mist and Gramma and the audiobook for Dylan Baker's reading.

I thought I'd read "The Reach" the story that closes out this collection before, but I guess I hadn't. By the time this collection was published in 1985, Stephen King was a bona-fide literary rock star. He warns the reader in this book's introduction that the act of writing short stories hadn't gotten easier for him over the years instead, it had gotten harder. Most of what the reader is presented with is great (hence the four stars), but King overwrites like crazy here. After the reliably folksy, mood-setting introduction to this collection from Sai King himself, things get rolling with "The Mist," the first (but not last) story in Skeleton Crew about ordinary people stranded and facing likely death, due to out-of-this-world circumstances. Other favorites of mine include "The Ballad Of The Flexible Bullet," a delightfully paranoid story King could have never written before or after cocaine; "The Raft," which was my very favorite in this collection for a long time; The Monkey," a story that doesn't get as much love as it deserves; "The Reach," the previously mentioned story that moved me to tears; "The Jaunt," which, for my money, contains King's most haunting story ending yet; and "Cain Rose Up," a story that other reviewers like to rag on but I can't help but dig. "Mrs. Todd's Shortcut" It takes place in Castle Rock, home of several King novels and short stories. "Nona" It takes place in Castle Rock, firmly placing it in the same universe as "Mrs. Todd's Shortcut" as well as several other King stories. Henrietta Dodd was the mother of Frank Dodd, as seen in The Dead Zone and mentioned in various other Castle Rock stories. This story takes place near Castle Rock in 1977-ish (I think), so before the major events of Carrie and Cujo. Hmm. Favorite story: "The Ballad Of The Flexible Bullet" Least favorite story: "Big Wheels: A Tale Of The Laundry Game (Milkman #2)" Favorite quote: I sit on the bench in front of Bell's Market and think about Homer Buckland and about the beautiful girl who leaned over to open his door when he come down that path with the full red gasoline can in his right hand - she looked like a girl of no more than sixteen, a girl on her learner's permit, and her beauty was terrible, but I believe it would no longer kill the man it turned itself on; for a moment her eyes lit on me, I was not killed, although a part of me died at her feet." (from "Mrs. Todd's Shortcut") Up next: It's everything you ever were afraid of.

Stephen King seems to be a bit hit and miss with me. 'Uncle Otto's Truck' mirrors 'The Monkey' and even "Christine' which I have not read yet. 'Gramma' is great and haunting. Especially 'The Jaunt' which seems to be Stephen's attempt at traditional SF short story writing. So a great read for fans and a recommendation to casual readers.