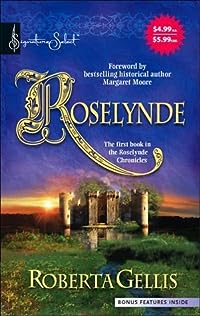 The mistress of Roselynde was young, uncannily intelligent, wealthy and had a reputation for being as fierce and protective as any feudal lord before her.

Not willing to be any man or woman's pawn, she is determined to make Sir Simon Lemagne's life miserable.

But the seasoned knight isn't quite what Alinor expects.What belongs to Alinor remains with Alinor, and God help any woman, man or holy crusade that gets in her way .

Ive been reading excellent reviews about it for ages and one of my friends, Ana T. No need to say that I immediately read the second one, Alinor, even if I dreaded some aspects of the story, especially the fate of our heroines 1st husband. Theres a good symbiosis going on since the beginning, and despite Simons objections concerning their age (he really is disturbed by his attraction to a much younger woman), I could hardly imagine anyone else at Alinor's side. Following the Lionheart in his quest along the Mediterranean and also some aspects of his life immediately remind me how little I like this English king. The author also mentions several times his possible homosexuality but even today historians are not convinced and mostly believe he was simply an asexual man who was more interested in his quests than actually have sex with everything that moved (like so many sovereigns before and after him).

Alinor and Simon didn't even "do it" until after they were married about 50 pages before the end of the book!

Alinor herself I found very irritating and the arguments she had with her warden just seemed a bit silly a lot of the time. I know this is probably more realistic for the time, but I couldn't warm to him because of that.

I held off as it is a lot of pressure to read a book that someone loves so dearly in case it is not for you and you don't want to disappoint them. I really loved the setting and it is a time in history that I am really rusty on so I spent a lot of the time going back and forth between book and internet to research.

When I first added this book to my TBR, I was thinking it was more of a bodice ripper than it ended up being, to be honest. A few dangerous stolen kisses was about as hot as it got until close to the end when at long, long last Simon and Alinor were permitted to marry and finally consummate their love. In fact, the historical feel of the book was very good, the author made me able to understand precisely the things that were going on, and why. I was so, so happy when they could be together at last, and I think I'm going to leave my ending there, with them together, happy, though not necessarily safe forever. I don't think I'll read the other books in the series, because (view spoiler)I already know from checking 'em out on here that Simon is dead in book 2.

I liked this book and very much liked the story between the main characters Alinor and Simon but sometimes it was a little too much history for me. This was the first time I can recall reading about this period in history. I really enjoyed the author's note which puts this period in history in perspective and offers insights to some of King Richard's behavior. I thought the writing was very good the characters were well drawn and I enjoyed the story.

This adventure took us to Wales then off on the crusades via dangerous sea crossings, peralis snow capped mountain traversing, plagued by wrekers & bloody skirmishes.

I didn't really like that aspect of their relationship and found it hard to believe that Alinor would fall in love with a man old enough to be her grandfather (in medieval times this was completely possible).