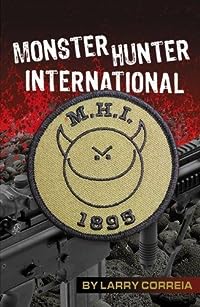 Five days after Owen Zastava Pitt pushed his insufferable boss out of a fourteenth story window, he woke up in the hospital with a scarred face, an unbelievable memory, and a job offer.

Monster Hunter International is the premier eradication company in the business.

And now Owen is their newest recruit.

Should the Cursed One succeed, it means the end of the world, and MHI is the only thing standing in his way.

With the clock ticking towards Armageddon, Owen finds himself trapped between legions of undead minions, belligerent federal agents, a cryptic ghost who has taken up residence inside his head, and the cursed family of the woman he loves.

I looked forward to the sequel (which was good but not quite as good as this one) and also snapped up the third (which I think I may like even a little better than this one). These are good books and while there are others I like better...still with only 1 to 5 stars to use, I think I need to go with 5. I love this book as I love the Dresden books and some other lighter reads and couldn't care less what others think of the fact that I enjoy them. I would say that if you are so concerned about what others think that you won't read the books you enjoy (or at least you won't "admit" to it) that in itself may be a deeper problem than choosing to read something for "fun".

It was also nice in the way his voice engaged me into Owen's point of view; the introduction to the world of monsters, the love of guns and his growing competency in fighting monsters. It was a little surprising to me to find it in such an action oriented book, but at least is remained secondary and didn't dominate Owen's thoughts or the storyline.

I want to like this book, because this is so right up my alley and the story is really good. :D It's very much a Baen guy book. The girl lead also, sadly, has a very standard Baen man-book personality: she is gorgeous, she kicks much ass, dresses in leather, and has cute glasses.

If I were forced to give you an elevator pitch, it would be something like this: "Imagine Dresden files if you removed all the magic and replaced it with guns...." That's not a really accurate description, mind you. Differences: The Dresden files starts off small, with Harry trying to solve murders and occasionally fighting a monster or two. But if you pick this up looking for the slow burn of the Dresden files, you're going to be disappointed. Another difference: these books tend to be a lot longer than the Dresden Files.

This book can be described as Dresden Files on steroids and with a lot of big guns. The stakes were way too high for the first book in the series with the whole world is about to be destroyed and a lot of super-monsters trying to kill a poor new recruit of MHI. It would be fine with me if Owen hunted some secondary monsters through the whole book, but he was thrown against really big guys almost from the beginning. Still, even with the problems I described, the book is fun to read, and I will continue with the second book in the series right away. If you want to read a about a group of people creating big explosions fighting supernatural monsters you cannot go wrong with this one.

This book has a whole lot of stuff working against it: The author is widely referred to as a right-wing nut, lackwit, conservative asshat, misogynist and homophobe. But I only heard of the author's antics when I was halfway through the book. I said to my little self, "fish this shit, I'm enjoying the fish out of this book and don't want to know what a fishing fish the author supposedly is." And I kept on reading. Now about the pro-gun, anti-government thing. Yes, there are guns in this book. LOTS of gun.

Because in Monster Hunter International Mr. Correia has based his hero, Owen Pitt Zavablahblah, on the interesting personage of Larry Correia. Now let's just flip to the about the author page at the back of the book.., oh look Mr. Correia is also an accountant, weird. Hmm, it says here Mr. Correia is a gun nut and shooting contest competitor. Not saying I expected anything high prose from a book called Monster Hunter International, but I thought it could at least be fun.

Monster Hunter International (MHI #1) This is one KICK ASS rockin,' rock 'em-sock'em, Jesus Block 'em, Rock and Roll, if it Moves shoot it if it don't use it like a bullet proof shield or cannon fodder, Monster Huntin', holy smokin' good read. I said "Hell no, I just want to know how to get them back down!" (maybe I'll read a Jane Austin Novel). (If I could let you hear Jack Webbs voice reading this like the start of Dragnet, it would be perfect.) But now, OZPs just a simple, if packin', CPA looking to help you and me file our taxes. Bring a lot of Band-Aids, Pitt, this could get ugly. Pitt and the gang faces all of them and these things take no prisoners...unless they want to bring a sack lunch, then, maybe they take prisoners, but normally, they eat on the spot. I'd love to say more definitive stuff about the plot, but I don't want to spoil it. Rest assured that I have read it, and I found it a lot of fun and full of wear your seat belt and sit on the edge of your seat action. Characters - For action adventure and this style of Urban Fantasy Monster butt-kickin', this lot is better than most. Pitt is huge, muscular, with sloping Neanderthal brow and more than his share of scars...I'm sure the ladies will still see him as "a hunky-dude" but nobody will consider him "Pretty." Pitt has a sense of humor, he's a genius trapped in the body of "Sasquatch" and a crack shot with several forms of slug throwing weaponry and sharp edged weapons. Kind of like Reba Macyntire in "Tremors." (maybe better looking).

While holding the ideology itself (in this case anti-gun control) is fine, the insults levied against those who disagree, make the (a) book unreadable, and (b) the protagonist un-sympathetic.