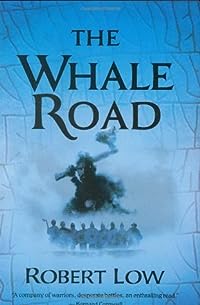 A band of brothers, committed only to each other, rides the waves, fighting for the highest bidder, treading the whale road in search of legendary relics.Life is savage aboard a Viking raiding ship.

Although young, Orm must quickly become a warrior if he is to survive.His fellow crew are the Oathsworn---named after the spoken bond that ties them in brotherhood.

Hired as relic hunters, the Oathsworn are sent in search of a sword believed to have killed the White Christ.

Not only a compelling narrative, The Whale Road also brings a new Viking landscape stretching from Scotland through the Baltic and on to Istanbul.

Most of all the things I liked about this book, it is definitely the humour. In fact I don't think any other book has made me laugh out loud, other than maybe Bernard Cornwell's Saxon series. I think Robert Low is doing his own thing and doing it well. If you like Asterix and the Vikings, and you like it mixed up with some white entrails, f$#k words and dry humping on bar tables, then this is the book for you. If I didn't already have my next book lined up to read, I would be straight on to the next book in this series, because as soon as I got halfway through The Whale Road, I bought the next three books.

It had a good back bone - a saga-worthy quest for an ancient relic that had ties to both Atilla the Hun and Christ. I really wanted to like this book and I just can't put my finger on what it was that put me off. Many people seem to like these books and I may just have caught this one at the wrong moment.

It's bloody, it's raw, it's stinky, gruesome and a bit f*king rude.

Robert Lows The Whale Road takes us back to over a thousand years ago to experience life as a Viking raider through the voice of young Orm Rurikson. Orm becomes a member of the Oathsworn, the crew of a Viking raiding ship. Brotherhood oaths and shield walls notwithstanding, Orm recognizes survival on the battlefield may have as much to do with luck as skill. But if youre looking for an action-packed, entertaining story, a compelling page-turner that grips you into the grisly warp and weft of a Viking raiders life, then this is a book for you.

Orm is no hero, but he keeps getting through situations that he realizes should have killed him, starting with being attacked by a formerly-captive polar bear, the accidental survival of which gives him his nickname, Bear Slayer. I appreciated the outlook that Low gives to Orm, that real battle is nothing like the glorious sagas of Norse culture. Other authors have explored the idea that heroes are actually people who have blundered through the danger of battle and survived only by luck (if you consider the survivors to be the lucky ones), like Kurt Vonnegut in Slaughterhouse Five, for example. I will definitely be reading book two, The Wolf Sea, to see where Odin leads young Orm next.

Disappointing The story is fairly good: the sort of plot that you would expect from the likes of Conn Iggulden.

At the beginning of the book I thought it was going to be 2 stars but it turned out to be a solid 4 star despite the first 100 pages.