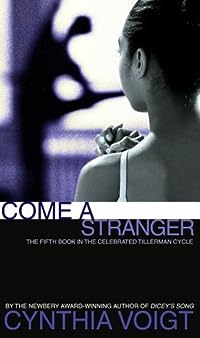 Although devastated when she is asked to leave an exclusive Connecticut ballet school, Mina Smiths finds solace in her friendship with Tamer Shipp, the summer minister, and learns about his own difficult adolescence, Harlem ministry, and family life.

Mina is such a fun character and I loved getting to know her and her family more. I also love that not much happens in these books in way of action, but I still find them page turners.

This has been my favorite book of the Tillerman Cycle so far.

Like most of the other books in the "Tillerman series" (which starts with the excellent Homecoming, this book could stand on its own easily, but gains even more depth and emotional resonance when one has read the previous novels in the cycle. Voigt follows her through several years as she grows into a strong, confident, and questioning young woman with the help of friends like Tamer Shipp (the visiting summer preacher) and eventually Dicey and her family.

I noticed throughout the book that Minas dance teacher doesnt like her and treats her differently because of her skin color. Mina was lucky to go to that camp which was taught by one of the best dancers only because she had a scholarship but the girls rest of the girls were white and their parents could afford to send them every summer. I really liked this book because its about a very strong girl who loves dancing and doesnt care about what people say about her skin color.

While I sometimes felt that Voigt wasn't the right person to be exploring these issues (a POC author would have been better), in the context of a series with multiple POV's, it's better, I think, to do your best with a POC perspective than have all the protagonists be white. It's a meandering narrative that takes Mina all the way from fifth grade, through the events of "Dicey's Song" in eighth (and beyond, in an unnecessary epilogue). Although I was looking forward to getting to Dicey because I love Dicey and Mina's relationship, I unfortunately felt that the book took a dip in quality when we got to the events of "Dicey's Song." The one thing you don't want to do, from a racial sensitivity perspective, is write a book from the POV of a POC character but just make it be all about white characters, and tbh that is sort of what happens once Dicey is introduced? Another problem is that pivotal scenes from "Dicey's Song" are just sort of summarized, I think in an effort to keep from being repetitive. I think the goal for an "alternate POV" book like this should be that it stands completely on its own and is satisfying even if, for some reason, you've never read the original it's remixing. She was supposed to have three; in the book, she only ends up going twice, but I think it would have been better, especially if expanding this part of the book to the length of an entire middle-grades novel, to keep the third summer, making each of the three hit different emotional notes. Considering this as a distinct narrative would probably also have improved it, because as it is, I feel like it's unclear what we're supposed to get from seeing the same scenes from Dicey's book but from Mina's perspective.

Midway through the book i understood that Minas dance teacher does not like her and treats her differently due to her skin color. i took to understanding that Mina was lucky to go to dance camp which was taught by one of the best dancers only because she had a scholarship but the girls rest of the girls were white and their parents could afford to send them every summer.

But it was the 90s, and I loved this book, and Cynthia Voigt is a fantastic writer, so I guess at least there's that.

Mina learned about racism through experience.

I just know when I get to the end of these, I'm going to wish there were more.