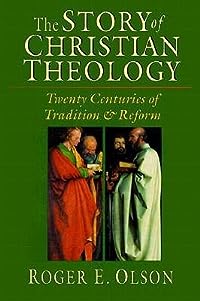 The Story of Christian Theology: Twenty Centuries of Tradition Reform

Theologian Roger Olson believes that the history of Christian theology should be told as such a story, one replete with thick plots, exciting twists, interesting people and fascinating ideas.

In this panoramic work of historical theology Olson vividly recounts the deeds and words of the cultists and apostolic fathers of the second century, the clash between the theological schools of Alexandria and Antioch, the epochal division between East and West, the revolutionary advent of the Reformation and much more, right on up to the dazzling, sometimes dismaying fallout that has continued to shake Christians through the twentieth century.

Evenhanded, refreshingly readable, impressive in its breadth and depth, The Story of Christian Theology is poised to become a standard historical theology text.

I was excited to get this book and bought t a few years ago within a few months of its publication. 4. Sometimes insightful On the bad side: profoundly imbalanced and unfair to the folks he doesn't like (Reformed, conservatives, Early Church Fathers, etc.) A few example: * His treatment of Old Princeton is as superficial as I have ever seen. Not surprising if you read Olson's bizarre letter to the editor of US News and World Report about 2004 regarding what a vicious tyrant Edwards was.

Nevertheless, upon completion of "The Story of Christian Theology," I had concluded that Olson had successfully offered absolutely nothing new to the understanding of historical theology. Instead, we hear Olson's anachronistic judgments and condemnatory voice coming down on figures in history in such a terribly historically-fallacious way, that one is hard pressed to take Olson seriously. When one is reading Olson's text, they do not learn about the development of Christian theology, but they do learn a lot about Olson himself; viz., that he is a free-church loving, Calvinistic-hating, Anabaptist-leaning, Arminian. Rather than laying out all his cards on the table before he begins his historical survey, he conceals his cards, and thereupon makes inappropriate, unfair, and anachronistic ejaculatory comments in between his descriptions of the development of historical theology. The Christian Apologists obviously, Olson assets, succumbed to this conception of God. Olson propounds this false dichotomy all the way throughout his book. All of the above has been sufficiently refuted by Gavrilyuk's "The Suffering of the Impassible God: Dialectics of Patristic Thought" among many other monographs that have serious problems with this terribly fallacious understanding of historical theology. Olson's understanding of the "two schools" of Antioch and Alexandria is simply false. Hence, it is simply wrong to say that Alexandrian theology stressed Christ's divinity whereas Antioch stressed his humanity. Calvin gets a mere three pages (410-412), whereas Anabaptist theology gets sixteen (412-428), and is not free from Olson's inappropriate anachronistic comments seemingly condemning the man he is supposedly supposed to be objectively surveying.

Olson gives us an overview of Christian theology beginning with the Apostolic Fathers, moving through the early church, the medieval Scholastics, the Reformation and on up to the 20th century. For example, he mentioned numerous times that Tertullian wrote "What has Athens to do with Jerusalem?" to show that Tertullian opposed Christian use of secular philosophy.

Olson breaks down each period of theology into manageable bits by focusing on a few major theologians who really shaped their age.

This isn't something I would recommend to everyone--too long and specific for that.

The thesis of Olsons The Story of Christian Theology is that the ultimate thread common to Christian theologians throughout history is salvationGods redemptive activity in forgiving and transforming sinful humans. In fact, in the preface and throughout the course of his book, Olson explains that the key to understanding the history of Christian theology is to approach it through the lens of soteriology. He explicitly says that The history of Christian theology can and should be told as a story. It is significant, therefore, that Olson opened the Preface of his book with the assertion, People live from the stories that shape their identities (11). Compared to other works in the field, there is a sense in which Olsons book seeks to provide an equal balance to the particular nuances of doctrinal formulation, on the one hand, and universal coherence, on the other hand. If Olsons thesis is that specifically salvation is the most important thread throughout Christian theology, then we should expect to see this play out in history. Olson points out that it was the Church fathers responsibility to, in some sense, formalize the Christian faith and life lest heresies crept in (39). This soteriological significance can be seen throughout the whole history of Christian theology. Scott Clark, Professor of Church History and Historical Theology at Westminster Seminary in California argued that Olsons bias flows out of his book when he gets to Jacob Arminius and the Arminian/Calvinism debate.

I was required to read this book for a Masters-level theology class at Ohio Christian.