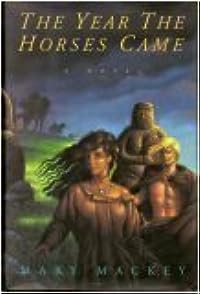 The Year the Horses Came

With great range and dazzling detail, bestselling novelist Mackey delivers a beautifully written, soundly researched, and dynamically paced prehistoric romance with the popular appeal of Clan of the Cave Bear, Mists of Avalon, and Roots.

Read the Book "The Year the Horses Came" Online

The Goddess people are always perfect and loving and pacifistic (yeah, right) while the Sun God guys are evil and cruel and women haters. Even pacifistic people aren't perfect. Put some goodness in the Father God worshiping societies -- as sunlight can be gentle and warm.

Marrahs fateful encounter with the shipwrecked foreigner Stavan signals the beginning of the end of her Goddess-worshipping culture, an inevitable future seen by her mother many years earlier. Marrah is charged to bring word that the earth-worshipping Goddess cultures are threatened by the Horse People of Stavans culture. The first part of the book uses the relationship between Marrah and Stavan to draw broad contrasts between matriarchal and patriarchal societies, especially in the framing of relationships between men and women. There are a few encounters with other Goddess cultures along the way: a quick visit into the caves of Lascaux to be awed by the works of their Paleolithic ancestors, another to the island of Sicily for a fertility celebration, even another to the Iron Gates in Romania where Marrah and her brother fall ill with a disease that finally evens the debt between Marrah and Stavan. Even though I would like to know what happened to Marrahs mother (whose story was left dangling in an ominous way), there is little else compelling me to continue with this series.

Storytelling Magic: Mary Mackey's The Year the Horses Came Darlene Reilley One of the most admirable things writers do is to embed in the cultures they create. In Mackeys novel The Year the Horses Came, she explores the relationship between Marrah, a priestess of the Shore People, and Stavan, a marooned warrior. Mackeys use of song is an effective and brief way to say a lot about a peoples history with few words. One way Mackey illustrates the depth of culture through song is through teaching stories. One of the most original uses of song takes place when Marrah goes on a journey; she needs to return to her Mothers people to warn them of her visions of invaders. Mackey lays out the plan for the characters journey through song, and through repetition, her character can follow the map. Mackey writes: The entire history of the Shore People was memorized; to forget the words to even one song was to forget some essential piece of the past (58).

Things started to get so much worse (in an interesting way) once she started on her way to bring her warning to others of her people, though it was still fun getting to see the different customs. I began to grow nervous for his character when we saw how he grew more accustomed to the Hansi practice of horse riding and spear throwing and bow shooting, and I definitely breathed a sigh of relief when Marah and the other escapees rode up to Zuhan's tent to find him (Arang) packed and ready to leave.

anyway research show again and again that live back then was IDD very black and white ...this trilogy is well worth reading I could not put the books down at all only thing I did not like was when I ended the last book I wish she would have continued with a bigger series of these books as I was not ready to leave the world the book puts you in.... The man of war prefers the right. Weapons are instruments of fear; they are not a wise man's tools.

"New York Times" bestselling author Mary Mackey's published works include 13 novels, and 7 books of poetry including "Sugar Zone" which won the 2012 PEN Oakland Award for Literary Excellence. The rainforests of the Amazon and the people of Brazil have been a major influence on two of her collections of poetry, "Sugar Zone" and "Travelers With No Ticket Home", and on two of her novels: "The Widow's War," and "The Village of Bones," which is a prequel to her bestselling Earthsong Serious about Prehistoric Europe. A free resource for writers and readers, it contains interviews with experts on various topics including "How To Get An Agent," and "Helping Independent Bookstores Survive and Thrive." You are invited to ask Mary questions about these interviews and other topics by going to the Goodreads "Ask The Author" section of this profile page or by visiting her website at http://marymackey.com/.