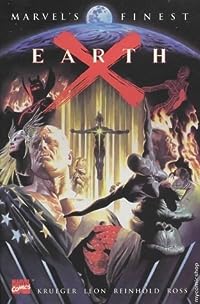 Stories that push the normal boundaries and force the reader to think.

Stories so powerful in message and so grand in scale that the guidelines by which such tales are usually judged are completely rearranged.

Spawned from the brilliant creative mind of Alex Ross, EARTH X is one such epic.

Years ago, Alex Ross, comic book artist, showed off some of his artwork depicting a dystopian Marvel future in Wizard magazine. So the honchos at Marvel said, If we print an actual comic with a story centered on this artwork, well make millions. The new Skull is a punk-assed kid who controls people and has an army of evil doers taking a choo choo train to NYC. Tony Stark becomes the Howard Hughes of superheroes (booze, hookers and long dirty fingernails) and just hangs out in his iron tower Reed Richards took over for Dr. Doom at some point and he takes the blame for how this went down and tries to figure out this whole mess and eventually punks the Celestials (view spoiler) by turning his son, Franklin, into Galactus and scaring the crap out of em.

Earth X is an alternate universe where the reader can get a different look at the characters he might have gotten used to while reading classic or mainstream Marvel comics. What begins as a struggle between the Watcher and X-51's human personality turns out to be a whole review on the origins of some of Marvel's best known characters, and the reconstruction of what happened in this Earth during the 20 years Uatu couldn't watch. It is Caps' finding that the Skull is alive that starts the adventure happening on Earth as the reader watches as Uatu talks with X-51 and tries to stripe him of his humanity that he seemly sees as a flaw. PLOT REVEALING SPOILERS As X-51 tricks Uatu into letting him know of the Celestials' intentions towards Earth, he finds that the planet is hatching a Celestial, that it would be destroyed by it and that humans were enhanced by them to be its protectors. The whole idea of the Celestials being the "bad guys", of an evolution that links mutation with them but also explains how the gods came to be, as survivors of planets already destroyed and of aged, tired and depressed heroes appeals to me a lot, as a believable plot that doesn't hang on to what the usual reader expects or believes untouchable.

Starting out some 20 years plus into the future of the Marvel universe, Aaron Stack, a.k.a. Machine Man a.k.a. X-51, is summoned by the Watcher on the Moon, who requires his assistance in watching the development of the human race. Sometimes the scope almost seems to big for the story, however, and this becomes particularly clear in some scenes in which certain minor characters (in the context of the story) are presented in ways that mostly seem gratuitous and out of character. In fact, in the middle of the story, these scenes started bothering me so much that I actually wondered if the story would go belly-up and earn a mighty low grade from me after a genuinely strong and interesting start.

I really liked the explorative elements of the book, which I suppose is a fancy way of saying I enjoyed the continuity fanwank. The characters don't really age or grow old in the main continuity, but in books like this the creators can imagine their later years. I found the style very similar to Kingdom Come, and it all fell in to shape when I read (on wikipedia) that the book came about after Ross did some KC-style character sketches for a magazine and it shows. I enjoyed Earth X on the level of a good super hero story, it didnt make the kind of impact of Marvels or Kingdom Come, let alone more famous works like Watchmen or The Dark Knight Returns.

I haven't read superhero books in maybe 15 years (got sick of the constant restarts), but a friend gifted this to me, saying it'd be relevant to my "how does belief change the supernatural" interests, and boy, was he right.

But some of the most poignant moments of Kingdom Come don't hit me in this book.