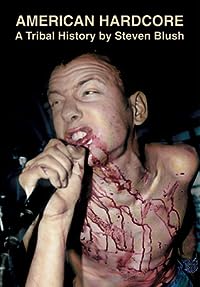 Hardcore punk was an underground tribal movement created with anger and passion but ultimately destroyed by infighting and dissonance. This oral history includes photographs, discographies, and a complete national perspective on the genre.

The author is only interested in documenting his version of what the early hardcore scene was, from his white, dudebro perspective. Few women or people of color are interviewed, and when a quote from a woman is included, it's to validate the author's claim that few women were really in hardcore, that the few who were involved were 'ugly bitches' (he actually says that in the next, no joke), and that they were all put off by how straight edge guys wouldn't have sex -- because you know, that's the only reason women would be interested in hardcore shows, the potential dates they could get out of it.

Whereas Please Kill Me is filled with tons of amazing voices, contradicting each other, and full of weirdness and wonder, everyone in American Hardcore comes off as boring and self-obsessed bros. Now I've met a few people who were a part of the mythic scene I so wanted to be a part of as a kid and they are not boring, not self-obsessed, and not bros.

American Hardcore is full of typos and (at times) inappropriate opinions and biases of the author, but luckily 80% of the book is interviews & Blush was smart enough not to mess with that.

Strange statements like "Strategically, it was best to get there early enough to see Saccharine Trust's weird shit, get loaded outside during the Minutemen, then return in time to rage for Flag" (as if no one cared about Boon and Watt's legendary performances) and his minimizing of the problems with white power bands (dismissing it all as MRR scaremongering) show clearly that Blush has an agenda, and he wants it to be taken as gospel.

The noise surrounding the book echoes a lot like the music it chronicles. But I really enjoyed the book.

The author was part of the scene and a show promoter, but most of the book is snippets of interviews with band members and others on the scenes of various cities across the country where hardcore punk popped up.

This book should be a great resource full of information from the people in bands or that went to shows in the 80's.

There are good things about this book. In the foreword, it says that the first edition of this book set the record straight on American Hardcore Punk music. These claims that the book is definitive, that it sets the record straight are repeated on the back cover. (And for the record, I dont like it the other way, either. This book is divided into four sections, each of which is subdivided into chapters. I love me some DKs, but Biafra is perhaps not the most super reliable of sources, and maybe, people writing history books, you should talk to at least one other person before you start talking about Marxist brute squads. Chunks of the book were clearly moved around without regard for whether the info makes sense in its new context (in the Misfits chapter, for example, he starts talking about two members of the band leaving, but those two people were not even in the band yet, according to the larger timeline, so its like, wait, what? Its fine when its maybe a paragraph at a time, but each chapter tends to end with a giant list-like info-dump of bands from that scene, the records they made, and what the members are doing now. I could overlook that shit, but wow, I am totally over dudes who think that punk rock died in 1977, or 1981, or 1986, or 1991, or whenever it died for them. The problem is when you go and assume that everyone else feels and understands and experiences this moment or this song or this painting or this scene the same way you do. Except, fuck it, I have been thinking about this book and re-reading it and complaining about it for MONTHS. I have a lot of feelings about hardcore, apparently, and this book pushed like 127 of my 133 buttons, and Im done. (I have, over the course of this review, started and stopped and deleted and re-written and re-deleted rants about homophobia, racism, the editorial process, Jello Biafra, Ian MacKaye, John Joseph, the state of Texas, the city of Chicago, basketball, Revolution Summer, riot grrrl, and Glenn Danzig. I am not even kidding.) So. There is good information in this book theres a lot of it, actually and there are a lot of stories that I liked reading.