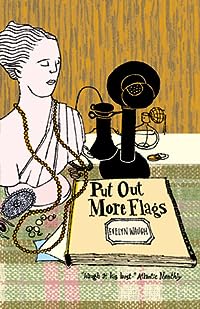 Put Out More Flags is Waugh's superb send-up of "smart" England, the bohemian crowd, as World War II approaches. Making a return appearance, Basil Seal this time insinuates himself into an odd but profitable role in the country's mobilization.

Published in 1942, Put Out More Flags, brings back characters from earlier Waugh novels, including some of the Bright Young People from Vile Bodies and the caddish Basil Seal from Black Mischief. They were like first-class passengers on the Titanic using shards from the fatal iceberg to chill the last of the champagne: In the week which preceded the outbreak of the Second World Wardays of surmise and apprehension which cannot, without irony, be called the last days of peaceand on the Sunday morning when all doubts were finally resolved and misconceptions corrected, three rich women thought first and mainly of Basil Seal. First, an exchange between Basils sister Barbara Sothill and her husband Freddy, a serving officer: Freddy: If thered been more like us and fewer like Basil thered never have been a war. She was thinking, Supposing Mr. Seal gets himself killed. How does Basil respond to the expectations and desires of his mother, sister and mistress? With the outbreak of WWII, the opportunistic Basil states his objective early on: "I want to be one of those people one heard about in 1919: the hard-faced men who did well out of the war." Lady Seal seeks the aid of Sir Joseph Mainwaring (Jo) a well-meaning, well-connected booby of the old school. Sir Joseph arranges a meeting between Basil and the Lieutenant-Colonel of an elite regiment. To please his mother, Basil lunches with Sir Joseph and the colonel. The disastrous interview is summed-up in a brief, understated exchange between Sir Joseph and Lady Seal: Lady Seal: I hope Basil made a good impression. Sir Joseph would have liked to say that there was no next step in that direction; that the best Basil could hope for was oblivion; perhaps in a month or so when the luncheon was forgotten In fact, Basil initiates a next step. Back in London, through a combination of chicanery and luck, Basil obtains a plum job at the War Office, working for the aptly named Colonel Plum.

Waugh's sympathies are huge (and yet in life such a splenetic and selfish man!) and his wit is at full tilt.

What a strange novel: It starts showing the adventurers of a lot of ne'er-do-wells trying to avoid doing anything serious for the "Great Boer War" as some of them call it.

In his own preface to this book, Waugh admits of those characters, I was anxious to know how they had been doing since I last heard of them The protagonist in this instance is Basil Seal who, in the language of his day would be labeled a rascal and a bounder, or a cad and a scoundrel, someone who, despite his mischief and misdemeanors, is a likeable fellow overall. The time period is the early days of World War II, and Basil is consumed with two driving ambitions: making money and becoming a war hero. Basils attempts at war heroism are far less successful than his money-making endeavors. In between failed attempts at money-making and war heroism, Basils dalliances include amorous flirtations with a wealthy, lonely woman, estranged from her husband, and a frivolous Bohemian artist.

Evelyn Waugh's father Arthur was a noted editor and publisher. Waugh would derive parts of A Handful of Dust from this unhappy time. After the Second World War he published what is for many his masterpiece, Brideshead Revisited, in which his Catholicism took centre stage. Evelyn Waugh, considered by many to be the greatest satirical novelist of his day, died on 10 April 1966 at the age of 62.