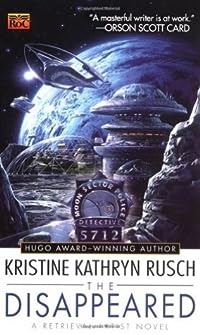 His job: Hunt down the Disappeared--outlaws on the run, wanted for crimes against alien cultures.

But alien laws often make no sense, and the punishments vary from loss of life to loss of a first-born child.

Now three cases have collided: a stolen spaceyacht filled with dead bodies, two kidnapped human children, and a human woman on the run, trying to Disappear to avoid alien prosecution.

Flint must enforce the law-giving the children to aliens, solving the murders, and arresting the woman for trying to save her own life.

This Endeavor Award-winning novel is Flint's first adventure, the story that turns him from a police detective in the Armstrong Dome on the Moon into a Retrieval Artist.

Read the Book "The Disappeared" Online

Inter species crimes are judged by a multi cultural tribunal, and if guilt against a human is determined, a warrant is issued. This whole setup is bad news for humans, since the various Alien punishments are extremely harsh. I have never read anything quite like this: its a very different kind of police procedural and also an interstellar legal thriller dealing with some pretty complicated legal and ethical issues. The novel takes a good hard look at the impact of differences between cultures.

I like the idea of a story about fugitives on the run from interstellar law, with the problems of members of one species being convicted under the laws of another, but for some reason the author decided to make the protagonists of this book law-enforcement officers who do everything in their power to not enforce the law, which is incredibly irritating. Then there's the lawyer who decided to represent an alien under his planet's own legal system and tried to subvert it, and then acts like it's not her fault when she's found to have committed a crime. But what annoyed me most was the attitudes of the detectives toward people who handed fugitives over to the law or gave away their locations.

I am, however, unlikely to continue the series. I wish I could continue.

It feels a lot more like a primer to the universe that's explored in later books than it does a work that satisfies on its own terms. Ruschs later works in this series (or at least the ones Ive read) were more complex and more interesting. In The Disappeared there really isnt any mystery...Other than how the main character will work his way through the moral/ethical ambiguities of his predicament: his job is to uphold laws which he finds abhorrent and unjust.

Does anyone remember that episode of Star Trek: The Next Generation where the young Mr. Crusher faces a horrible punishment for breaking a fence?

People who have paid good money to 'disappear' from their alien warrants are suddenly being found, and Flint really wants to keep that from happening.

I wasn't sure if all of the characters were likable or not, but that isn't always a requirement, and trying to find out was part of the curiosity aspect of watching it unfold. The author didn't try to include many technological wonders that would date it, it was mostly classic sci-fi Moon colony and inner planet settlement motifs, with her aliens providing the primary originality and fulcrum around which the various POV stories rotated. I really enjoyed the police procedural aspect of it too, but I always like a sci-fi mystery, it's an interesting way to illustrate a society. There were an awful lot of details once I thought about it, but it didn't feel that way at all, it felt like one of those easy, effortless mysteries that just seemed logical in the way it built and unfolded. I had a hard time believing Miles' actions at that point, within two hours he made major decisions and acted on them, no pause or hesitation, completely inconsistently with the serious and dedicated cop character who'd been established in the rest of the book.

As the book opens they are given a case in the Port, a mysterious vessel with three victims of a gruesome Disty vengeance killing inside. Meanwhile, quasi-legal Disappearance services have sprung up to shield and give new lives to people who are willing to pay. Both work hard to keep such a stressful situation from spiraling out of control, even when they could step back; Flint proves his humanity in the end, and tries to help as many as he can. All of the characters are very real, the stress and worry etched into every page, hope rare but held onto tightly. The story unfolds masterfully, weaving in and out of cultural and interpersonal relations, rules and regulations, philosophical conundrums, histories, desperate attempts to keep order, and it's always apparent that everyone wants to do the right thing, though only Flint is so willing to fight hard for what he believes in, then DeRicci, inspired by him and past caring about her future.

The story centers on two Lunar (actually Armstrong City, a dome on the moon) detectives who are faced with multiple crimes surrounding aliens and the Disappeared. While I found the idea behind the story interesting, I really had difficulty following why anybody did anything in this book. The motivations of the Disappeared people were pretty evident (I don't want to die/perform multiple years hard labor/have my first born taken away) but I never really felt I understood the motivations behind them getting in trouble in the first place.