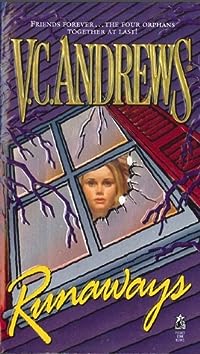 In the grim foster home for orphans run by Louise and Gordon Tooey, at least Brooke, Crystal, Raven, and Butterfly had each other.

Calling themselves "sisters," together they could forget the past and dream of a new chance...a real home.

Soon they were runaways in a borrowed car, desperately wishing to wake up one morning in a place of sunshine and love.

Raven hoped to be a singer, Butterfly wanted to be a dancer, Crystal planned for college, and Brooke privately hoped to find her mother in California.

But the highway was a dangerous place, and soon they were penni and more vulnerable than ever.

The book is about four teenage girl orphans who live in a foster home with many other children. I think the characters are relatable. When I read it I think I can feel how the character is feeling. I enjoyed reading this book! And personally I don't like rereading books unless I really enjoy it. If you like books that you can relate to or something that really happens you will love this.

The Orphans series certainly didn't represent Mr. Neiderman's best work and we had hoped it was temporary, but sadly, the VCA name would NEVER be the same again...

The story of VC Andrews' 4 Orphans, Crystal, Raven, Butterfly and Brooke, picks up about 3 years after they all meet at Lakewood House.

A few errors in the book. Then when conversation happens again it's Raven.

This book felt like I had been reading it much longer than I had. I liked this. I really liked that movie. I found myself thinking of that movie, crossroads as well as other wanting to make it in LA books and movies. If Crystal is 3 yrs older and the other girls are 17. I didn't like either of your choices. Raven wants to be a singer? Ruining Butterfly's chance for adoption to keep getting money. Oh they say Louise loves the kids and doesn't want to give them up. If they have $1400 combined to runaway to California with then Brooke sure wasn't left much. I don't like their chant. I'm glad Brooke did what I wanted her to do and peeled off running over their bikes. Ha the old man who has the girls come to his house to be looked after by his wife. Well he talks about all these people like the girls would know who he's talking about. I know people like that. Like oh he's different for me or doesn't believe it. But I'm always suspicious if love is thought of right away. So when the girls are debating on what to do for Butterfly for some reason I kept feeling like a girl was missing. I thought maybe Raven shouldn't go off with Taylor in case she's contagious or to help look after Butterfly but right away she assumed it was concern for her getting hurt. I just thought Brooke told her she maybe shouldn't go for reasons I stated. Yep she did exactly what I thought. Already talking of how much they like each other. I thought they worried for no reason. When driving the elderly woman left behind and they said there was an odd smell I thought it was going to be tinkle but they said charred wood. When she said it was a mess I thought maybe she was hoarder. I didn't like their chant and now the name Orphanteers is being mocked. Poor kids the 2 little girls scared about their dad. Brooke at the gas station I thought she would have dialled 911. After the native man found the girls sleeping in the rocks. The girls were caught after saving that man. He said one of the girls had to stay with him. Anyway after all that and they start following the native man one of the girls asked what's next and Crystal said scalping. Crystal's like me. Ok if she's in such a trance she's even drooling then yes that is bad. Butterfly needs a doctor. I had learned that seizures aren't necessarily like what you think from movies etc. Not sure how the chant helped them though. At first I thought Butterfly could be a pretty name but it bothered me through this book.

Some of the characters just didn't seem like the same people they'd been in their own books. Character flaws aside, I felt like this book got pretty repetitive. And this series fit into a bit of a pattern I had going at the time (The Outsiders, The Sisterhood of the Traveling Pants) of books that focused strongly on pseudo-families built on incredibly strong friendships. So the Orphans series may not be some amazing literary work, but I still enjoyed it, and it could work as a good introduction to VC Andrews's writing as it doesn't seem quite as dark or mature as nearly every other book of hers that I've read.

I have been reading Runaways by V.C. Andrews which is about 4 orphan girls who act as sisters wanting to feel loved and to be adopted. Everyone is cruel and their foster parents only want money and a clean home. They feel loved by each other, but what they really want is a place to call home. That was the first suggestion of running away because their foster parents were telling the people who wanted children that the child had something terribly wrong with them.

I have to be honest--the only reason I love Runaways so much is because it is so very unlike many of Andrews other works. In fact, Runaways was a heartwarming novel about four young women who escape a shitty situation and only pull through by loving each other and staying loyal to their friendship. And the storytelling in Runaways (which, for whatever reason, was narrated by Brooke, who seemed the most generic out of the all the characters) could be pretty formulaic, it read differently because you could tell it had heart.

I like how Raven suddenly develops the talent for singing in the concluding book. I don't know, I feel like after the Hudson series, the quality just went down.

Books published under the following names - Virginia Andrews, V. She spent her happy childhood years in Portsmouth, Virginia, living briefly in Rochester, New York. The Andrews family returned to Portsmouth while Virginia was in high school. Her new-generation Gothic novel reached the bestseller lists a mere two weeks after its 1979 paperback publication by Pocket Books. Petals on the Wind, her sequel to Flowers, was published the next year, earning Virginia a $35,000 advance. The second book remained on the New York Times bestseller list for an unbelievable nineteen weeks (Flowers also returned to the list).