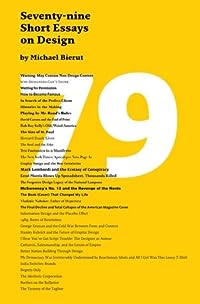 Seventy-nine Short Essays on Design brings together the best of designer Michael Bierut's critical writingserious or humorous, flattering or biting, but always on the mark.

In Seventy-nine Short Essays on Design, designers and nondesigners alike can share and revel in his insights.

Thank you for saying that!" I recommend it to everyone I know who is not a graphic designer so they'll know what all us designers are nodding and laughing about.

Like that blog, this book touches on just as many non-design aspects of life.

I reckon, like a lot of people who appreciate art and creativity, I feel like I know good design when I see it, but that doesn't equip me to be able to understand design on any real level. And because I am not the intended audience--a random, lay reader--I think it goes without saying that I would not be able to grasp 79 Short Essays on Design's strengths like someone who does understand design. And even though I don't speak the language of design, a lot of Bierut's observations can be helpful to any sort of endeavor, especially creative ones. Sometimes the focus is hazy, sometimes it feels like Bierut doesn't really know what he wants to communicate about the subject and simply cycles around an idea for three pages. Bierut, who seems to write based off of what is inspiring him at the time, makes regular use of "Recently," or "Several weeks back" or other non-helpful time designations. It's a book about design and it's very weird to be reading an essay about the design of something specific (Rob Roy Kelly's woodcuts, say) without a visual example for the reader to see.

But I found each one interesting enough to get me to turn to the next one, and sure enough, I read all 79 of them.

Because of this, Bierut's writing refers to controversies and hot topics at the time and they occasionally show their flaws in the light of the passing years.

e) a great article on Josef and Anni Albers retrospective wherein Beirut argues art can be cold and design can be so celebratory of life (who would have thought!)

He has served as president of the New York Chapter of the American Institute of Graphic Arts (AIGA) from 1988 to 1990 and is president emeritus of AIGA National. His book Seventy-nine Short Essays on Design was published by Princeton Architectural Press in 2007. Publications Seventy-nine Short Essays on Design By Michael Bierut Princeton Architectural Press, 2007 Order this book in Europe / North America Pentagram.com