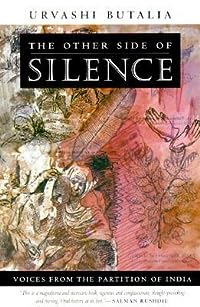 The Other Side of Silence: Voices from the Partition of India

Within the space of two months in 1947 more than twelve million people were displaced.

Yet, more than half a century later, little is known of the human dimensions of this event.

In The Other Side of Silence , Urvashi Butalia fills this gap by placing peopletheir individual experiences, their private painat the center of this epochal event.Through interviews conducted over a ten-year period and an examination of diaries, letters, memoirs, and parliamentary documents, Butalia asks how people on the margins of historychildren, women, ordinary people, the lower castes, the untouchableshave been affected by this upheaval.

To understand how and why certain events become shrouded in silence, she traces facets of her own poignant and partition-scarred family history before investigating the stories of other people and their experiences of the effects of this violent disruption.

Those whom she interviews reveal that, at least in private, the voices of partition have not been stilled and the bitterness remains.

Throughout, Butalia reflects on difficult questions: what did community, caste, and gender have to do with the violence that accompanied partition?

Believing that only by remembering and telling their stories can those affected begin the process of healing and forgetting, Butalia presents a sensitive and moving account of her quest to hear the painful truth behind the silence.

Read the Book "The Other Side of Silence: Voices from the Partition of India" Online

This is a fantastic, incredibly important work; a careful, detailed, & thoughtful collection of truths about the Partition of India and Pakistan in 1947. One (Hindu) survivor told of the inequity in treatment of Muslims by Hindus and Sikhs in pre division Punjab, and felt that to be the cause of the violence and anger: How can it be that two people living in the same village and one treats the other with such respect and the other doesnt even give him the consideration due to a dog! Interesting that of the many supposed catalysts for all of the violence, it was a Dalit (Harijan) woman, someone from a very marginal oppressed group, who spoke of how everyone used to live together in community, with intermarriage between Hindu and Muslim, friendships and celebrations all shared. The English were, of course, aware of this etiologic tactic: a woman who had not previously told her story - tells of an English deputy commissioner - well before partition - who was complaining about how Gandhi has: ...given us a lot of trouble...well leave because we have to, well leave, but not before we have taught him a lesson. Hundreds of thousands of women were abducted, raped, killed, sold. One might almost say that for the majority of Indian women, marriage is like an abduction anyway, a violation, an assault, usually by an unknown man. These stolen /raped/abducted women who desired to stay on with their perp was a much discussed issue AFTER Partition - "How could MEN allow this state of affairs to continue?" (the men wondered). Males under the age of 16 and women of any age were to be considered abducted and forced back to their families whether they wanted to go, or not. Many women were slaughtered by their own family in the name of purity. One man had witnessed all the women in his family killed - beheaded or drowned: Even today when I remember it...I cry, it helps to lighten my heart. Innumerable women were slaughtered by their own family in the name of the mens purity. Further, the work they did (cleaning toilets, dealing with dead bodies, sweeping) was not work any other group wanted: And there was a bizarre kind of immunity that their work bestowed on them:...if you kill a landlord, another will come up in his place. i dont know why i still find it astounding that womens bodies, sexuality, even their children - still belong to men, in so much (the majority?) of the world.

I was drawn to this book because my mothers family came over to India during the Partition. She also told me that my mother was in some sort of post where she wore a uniform. We are launched into her experiences with her personal story, though, even in this, she maintains a neutral stance. Indeed, many such tales emerge, where some made use of the tragic turn of events to confiscate the property of others, even that of relatives. These stories range from suicides, failed and successful, honour killings where men killed the womenfolk before the other party besmirched the family honour and, of course, the expected rape and murder of women on both sides. Although the book is hard to read for the most part, given the textbook like nature of its treatment, it has places where a more human face emerges-a whole section is devoted to one particular lady. Reading this book in light of the ongoing attempt to record first person accounts from those times, raises questions: will all this lead to more heartburn? And I am convinced that many stories will emerge showing the triumph of human goodness on both sides than those which make us all hang our heads in shame.

History of pain and anguish that dogged the lives. This book is an attempt to vocalize the pain, anguish, sense of loss and the ultimate silence that has captivated the life of mass.

The book wants to reach out and make sure we remember. Mainly, the book wants to make known the atrocities that the women were made to go through. They don't understand what they really want, and end up making absurd statements. But feminists like Urvashi Butalia are simple in their approach and understand how complex it is still.

That is something I've never done ever reading hundreds of books.

A collection and discussion of oral histories from Partition, when the British gave up control of India and the countries of India and Pakistan were formed. However, even if you are unfamiliar with the history of Partition, this book is a worthwhile read.

A line is drawn between India and Pakistan, The Other Side of Silence of millions who were lost. The Other Side of Silence: Voices from The Partition of India by Urvashi Butalia chronicles the stories of partition which were never spoken of. The Other Side of Silence, which explores the stories embedded in the minds of people, which they haven't shared with anyone. Starting from blood, Urvashi speaks about her long lost Mama Ji, (mother's brother), Ranamama, who preferred to stay in Pakistan only. His sacrifice, his hard decisions, his other side of silence, his conversion to an alien religion to survive the brutal world. The third chapter shared the silence of women who were abducted during the partition. I have heard many stories of partition from my grandmother, who used to live in Peshawar and on an unfateful night, she had to leave everything behind and come to India.

I read this book because of Tarquin Halls recommendation of it in his own book The Case of the Deadly Butter Chicken, an entertaining and informative detective story where the crime relates to this time in Indias and Pakistans history