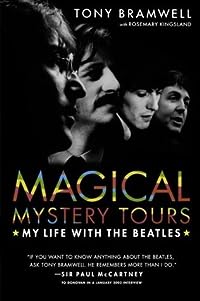 Magical Mystery Tours: My Life with the Beatles

Magical Mystery Tours is a tour de force." ---Entertainment WeeklyGrowing up in a postwar Liverpool suburb, Tony Bramwell was boyhood friends with three of the Beatles long before they were famous.

From overseeing the tours of Brian Epstein's Merseybeat stars to producing shows for Jimi Hendrix, the Who, Cream, and Pink Floyd at Epstein's Savile Theatre; and from producing and directing Beatles videos to heading Apple Films, Tony's life really did encompass a who's who of rock.With an insider's shrewd eye, Tony describes the rise and fall of the Apple empire, Brian Epstein's frolics, Ken Kesey's Merry Pranksters, Phil Spector's eccentric behavior, and stories never before told about Yoko Ono. He uncovers new information about the Shea Stadium concert footage, John Lennon's late-night "escapes," and more.

Conversational, direct, and honest, the ultimate Beatles insider finally shares his own version of the frantic and glorious ascent of four boys from Liverpool lads to rock and roll kings.Praise for Magical Mystery Tours"A must-read for anyone interested in the history of the Fab Four.

Bramwell doesn't hold back with his tales of the grand insanity that tailed The Beatles."--The New York Post "Energetically writtena vivid and intensely personal look at not only the Beatles but at a storybook trip from the docks of Liverpool to swinging London and the very epicenter of the British invasion."--Publishers Weekly "A sprawling, amiable account of life near the world's most famous and most gifted pop group.

Read the Book "Magical Mystery Tours: My Life with the Beatles" Online

Who knows So, in coming across Tony Bramwells account, I really was not that expecting much in the way of stumbling across new info about the band. Or maybe I really am green behind the ears regarding this band that what seemed to me as unheard-of accounts by Bramwell are actually old news to die-hard zealots, despite popular belief. Which really surprised me, since this is the first written work Ive come across that does not hesitate to be acerbic on the Ono-Beatles phenomenon, and with him being close friends with the band and all. But then again, Yoko is still around On the whole, Bramwells accounts on his life around the Beatles were extremely fascinating to read. Bramwells stories take for granted that the reader has already a passing familiarity with at least the more popular 411 regarding the FabFour.

Sure, he might've missed out on the Ed Sullivan show but from the earliest gigs at the Cavern Club to cruising Sunset Blvd with music industry honchos and crashing Mick and Keiths in Lennon's florid Rolls Royce, Bramwell was in the thick of it since day-one! Things of course that included partying with the biggest names in music, dining lavishly and being treated with Beatle-esque roaylty on both sides of the Atlantic. Without gasconading, Tony Bramwell critically manages to chronicle his time riding on top of the biggest cultural wave ever to hit mankind. If you're interested in the Beatles, rock 'n roll, the music industry or simply life as a rock star, well, this book's for you.

A pretty good insight book on the Beatles, especially their early years and from the Sgt. Pepper's to Let it Be era.

And there's nothing like a rip-roaring "Let me tell you what REALLY happened" gab session, particularly when your pal is so willing to dish on Yoko.

For those of you who don't care for Yoko, this book is right up your alley, as Tony was definitely an anti Yoko person.

The last part of the book deals a bit too much with the author's personal and professional life apart from the Beatles, but is still interesting for his take on Phil Spector and the corrupt business the music industry became.

On the flip side, Linda is written up like an angel by her halo's light Some of the facts might be played with a tad loose, and 3rd of the book has nothing at all to do w/ the Fabs (seeing as the band was broken up by that point) I'm sure die-hard "Beatle historians" would be pointing out things left and right, but really...